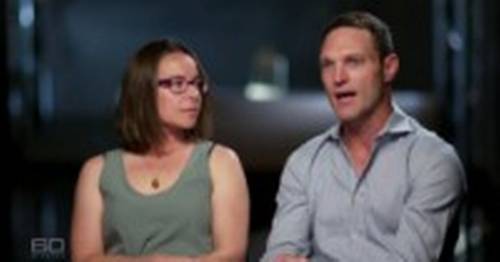 A shark attack survivor has relived how her husband saved her from the jaws of the Great White Shark.

Chantelle Doyle, 35, was on a trip to Port Macquarie in New South Wales with her husband Mark last year.

The surfers hit the crystal clear water early on what was a "sunny and beautiful day", Chantelle told 60 Minutes.

She said at about 9.30am the super predator struck "underneath my board – it hit my leg straightaway – just bang, grab".

The monster shark latched onto her calf and refused to let go before dragging her underwater.

Mark was about 10 metres away when he saw the fin and the shark's head near her leg.

He said: "So, I just ditched the board, to just start whaling punches… It was just, just throw as hard as I could until it lets go, because you sort of, just want it to be gone.

"[I was looking] dead-set in the eye. That memory sits with me a lot, a black eye.

He said he punched the shark's nose because "it' more sensitive"

Mark's efforts paid off because the shark eventually let go and swam away.

Chantelle then bravely paddled herself back to shore on her board.

Chantelle is now back in the water after 15 months of microsurgery on her leg along with rehabilitation and physiotherapy.

She said: "Muscle, bone, ligament, tendon, nerve, everything gets done.

"Most parts of my leg were injured except for my arteries. If my artery had been hit… I'm not having this conversation."

Chantelle Doyle, 35, was attacked by a Great White Shark while surfing in 2020
(

Mark previously told 9News: "I was trying to leverage punches down onto it. It feels like you're punching a brick wall, like it's hard."

Mark added: "You see the mother of your child, your support, everything you are, you just react. Get off that calf, that's all I could think, just get off."

But he said his wife is the hero for climbing back onto her board and paddling more than 160ft back to the shore as blood poured from lacerations on her leg following the attack.

A group of local residents used her board as a stretcher and her leg rope as a tourniquet to prevent blood loss.

Emergency services rushed to the beach to attend to Chantelle, who had been bitten in at least two separate places.

Paramedics were on the scene in just eight minutes.