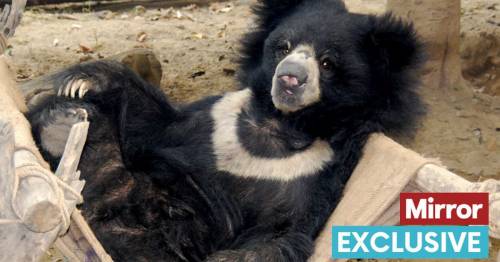 Swinging in her favourite hammock, Lallu looks ­every inch like a bear without a care in the world.

The 30-year-old is one of almost 200 bears rescued from being tortured into dancing for humans.

Now the saved animals while away their days at three retirement homes in India, founded 20 years ago by British charity International Animal Rescue and local partner Wildlife SOS.

And there’s no shortage of the bear necessities of life – love, ­kindness, and buckets of their ­favourite honey and porridge.

The Agra Bear Rescue Centre is about to welcome two young bears rescued after a supporter of the charity saw a sickening Instagram post of them dancing.

This will take the sanctuary’s bear population to 112, the other 81 are at the centres in Bannerghatta in the south west and Bhopal in ­central India.

A dancing bear prior to its rescue in India
(

Image:
© Press People picture collect A dancing bear prior to its rescue in India)

Lis Key, from IAR, said: “This month marks 20 years since the creation of the world’s largest dancing bear retirement home and our residents are living out their years in the lap of luxury.

“This is nothing more than they deserve as, if you look closer, you will realise every single one of their faces is mutilated as they’ve suffered unimaginable horror as ­dancing bears.

“Some of the bears enjoy chilling in the sunshine like Lallu, some are water babies like Wendy who likes to hang out in a pool.

“Others are more driven by their ­stomachs like Dhoni, virtually every sloth bear will do ­almost anything for honey.

“We smear honey on trees and hide it around their sanctuary, along with fruit enrichment barrels and wobble trees, which they bat with their paws, to get the treats inside to keep them entertained. It’s the bear equivalent of Netflix.” Keeping sloth bears in India has been illegal since 1972 but they are smuggled in from neighbouring Nepal, like IAR’s two new bears.

The bears have their teeth removed so they can't defend themselves
(

Image:
© Press People/Gavin Parsons Dancing Bear Micch prior to his rescue from life as a dancing bear)

The charity has given a home to 630 bears over its 20 years and most have lived long lives.

Each rescue is undertaken with the support and assistance of the Indian Forestry Department.

The first, 20 years ago, involved six separate bears, including a male called Raju, who is still a sanctuary resident today.

IAR boss Alan Knight was so moved by Raju’s plight he told him at his rescue: “Don’t worry, mate, we’ll get you out of here.”

Lis added: ‘‘Nowadays Raju leads a peaceful, pain-free life and his favourite pastimes are dozing in the shade during the heat of the day and sniffing out and slurping up honey from all the surfaces in his enclosure that his keeper daubs with it – honey logs, climbing frames and the trunks of trees.

“The horror that these creatures have faced is incomprehensible.

“Twenty years ago cubs were still being taken from the wild to go into ‘training’ as dancing bears which involved a red-hot iron needle being forced through their sensitive muzzle and a rope inserted through, sometimes even with a thorn or nail attached, to control the bears using pain.

“The wound in the nose was kept open deliberately – maiming every bear. The idea was a jerk on the rope would make the bear stand on its hind legs as though it were dancing whereas really it was trying to ­escape the agony.

“Bears were forced to walk over red-hot coals and would hop from foot to foot to mimic dancing, their teeth would be knocked out to make them defenceless and easier to control.

“They were taught to play dead on the road on command, look as though they were playing a guitar, and smoke cigarettes to catch the attention of ­tourists, including Brits. It was ­utterly barbaric.

“When they weren’t working they would be tied to a short piece of rope and a stake in the ground – and almost every bear we ­rescued initially walked in ­circles or swayed their bodies from side to side due to years of this.

“They all had the bear equivalent of PTSD and it was absolutely shocking to see. Our vets did their best to repair terrible injuries.”

Dentists have performed root canal treatment on bears, many of whom had teeth smashed out with iron bars to make them helpless.

Covid has meant tourists have been unable to visit the centres but when they return, paying £5 entrance, cameras are banned as even hearing the click of a lens can terrify the bears – and some turn their backs on strangers.

The charity has also launched a series of rescues in Armenia, where thousands of bears kept at ­restaurants, petrol stations and in private collections suffer in ­deplorable conditions.

It costs over £750,000 a year to feed and look after the bears, including their complex medical needs. Donate to International Animal Rescue at internationalanimalrescue.org/donate.