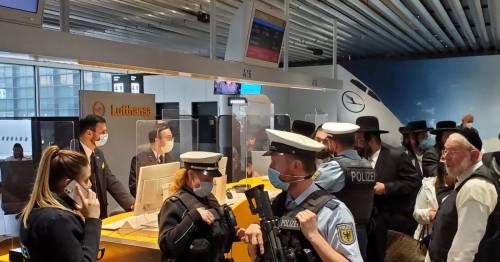 Orthodox Jews on a religious pilgrimage were banned from flying on the last leg of their trip when some of the group refused to wear face masks.

The group of around 100 had arrived in Germany from New York City for a brief stopover in Frankfurt before continuing to Budapest, Hungary.

Their issues started as they attempted to board the Lufthansa plane but claim they were stopped as “one or two” people were not wearing face masks.

When some mask-wearers objected to the move the airline decided none of the group would be allowed on board, Hamodia reported.

Travellers are no longer told they have to wear coverings on US flights but German law says they do.

Passenger Nachman Kanaha told Hamodia: “They explicitly said that nobody who is dressed alike on that plane is going to board the Lufthansa plane to Budapest.”

“They banned us because we are Jews. That’s the only reason.”

Another passenger called Yaniv added: “Why should they ban everyone for just one or two people not wearing masks? This was antisemitic discrimination.”

As they departed several spoke to representatives from the airline.

The group were told they could not fly with Lufthansa
(

In a video they were heard asking: “Is this a Lufthansa decision that all Jewish people on that flight, we can’t go on any other flight today?

The group eventually split up and continued their journeys on different airlines.

A spokesman for Luftthansa said: “We find the claim of anti-Semitism unwarranted and without merit

“We confirm a larger group of passengers could not be carried today on Lufthansa flight LH1334 from Frankfurt to Budapest, because the travelers refused to wear the legally mandated mask on board.

“By German law, Lufthansa, similar to any and all carriers operating in Germany, is obliged to follow the legal requirements of this mandate.

“In the new German Infection Protection Act, the obligation to wear a mask remains in place in public transport and thus also on board flights, as well as across all aspects of air transport. Medical or FFP2 masks must therefore continue to be worn on board Lufthansa flights, at all times.

“For legal reasons we cannot disclose the number of guests involved in the incident, however Lufthansa has rebooked the guests on the next available flight to their final destination. A prerequisite for transportation is that the travelers complied with the mask mandate, which is a legal requirement.

“As safety and security of our passengers and staff is our top priority, Lufthansa will continue to abide by all legal requirements, including the mask mandate imposed by the German government and those of the countries served.

“We do so for the wellbeing of all our guests.”