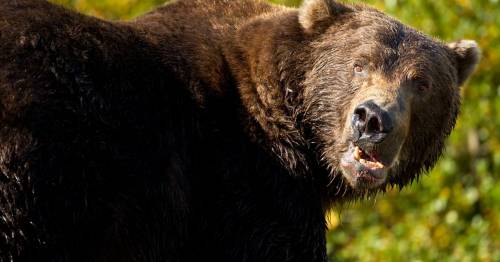 A bear killed a hunter who had fatally wounded it in a revenge attack, say reports.

An unnamed 62-year-old hunter had shot the brown bear in the Tulun district of the Irkutsk region of Russia.

The Daily Star reports that graphic images from the scene show the man's body next to the dead bear.

It is thought that the man thought the bear was already dead and so climbed down from platform in a tree from where he had shot it, only for the wounded creature to attack and crush his skull in a final act of defiance.

"When a 62-year-old man climbed down, the mortally wounded bear attacked and killed him,” reported the Interfax news agency.

“The carcass of the animal was found 50 metres from the place where the man died.”

The incident happened in the Irkutsk region of Russia
(

The unnamed 62-year-old had his skull crushed
(

The skull of the hunter was “crushed” and he suffered claw and fang wounds in the furious attack.

“The mortally wounded predator managed to inflict an injury from which the hunter died,” said the regional office of the Russian Ministry of Internal Affairs.

The hunter had been reported missing before officials managed to track him down.

The macabre scene was located after a search party had been organised in the Siberian region.

Bear attacks in Russia are common, however.

The hunter's body was found close to the bear's carcass
(

Last year, a teen was savaged to death by a bear who devoured "half of his body" when he took a shortcut into more dangerous paths in a Russian national park.

One of the men managed to stab the animal in the neck with a pen knife several times before playing-dead and the other rushed back to raise the alarm.

Inspectors at Ergaki National Park made a grim discovery when they discovered the bear lying on the 16-year-old boy's half-eaten body some 500 yards from the tourist camp in the Sayan Mountains.

Previous : Plane bursts into flame in Miami crash landing horror ’caused by faulty landing gear’
Next : Residents ‘traumatised’ by spate of dog attacks ‘living in fear of their lives’