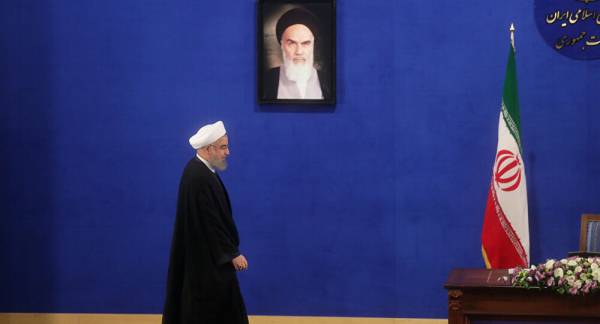 Attempts by the administration of US President Donald Trump to reinstate UN sanctions against Iran, following Washington’s departure from the Joint Comprehensive Plan of Action (JCPOA) two years ago does not make sense, say Iranian and British academics, noting that Trump’s maximum pressure policy has failed to crush Tehran.

On 19 September, the Trump administration declared that it would reimpose United Nations sanctions against Iran over what the White House called a “significant non-performance of [Tehran’s] JCPOA commitments” citing a “snapback” mechanism set in the UN Security Council Resolution (UNSCR) 2231 which reinstates all restrictions that were in place prior to the adoption of the resolution.

Virtually all @UN sanctions have returned on Iran, the leading state sponsor of terrorism and anti-Semitism. This includes a permanent extension of the arms embargo. This is great news for peace in the region!

​Washington notified the Security Council on 20 August that the US would be picking the mechanism to resume sanctions by 20 September and urged the international body’s member states to follow suit.

Does the US Initiative Have Any Instrumental Sense?

Britain, China, France, Germany and Russia – the other signatories to the 2015 JCPOA which was unilaterally dismissed by Trump in May 2018 – have shown no intention to re-enforce previous sanctions against Tehran. The United Nations made it clear in August that Trump’s attempts to initiate the snapback mechanism have no legal grounds as the US is no longer a party to the Iran nuclear deal.

“If to explain it adequately, Americans have left the JCPOA, according to the remaining members of the JCPOA, they therefore lost the right to use the snapback mechanism”, said Tehran University professor Seyed Mohammad Marandi, part of the Iranian delegation that helped to negotiate the 2015 nuclear deal. “It’s their own foolish mistake, they should have used this snapback mechanism back then or they should have stayed in JCPOA and use it now, but they made a very stupid move”.

There is no point behind the new Trump initiative, echoed John Dunn, professor emeritus of political theory at Cambridge University.

“I’ve no idea whose this new initiative was in the first place”, the British academic says. “If it was Trump’s own idea, there is no reason to assume that that makes any instrumental sense”.

Wrong again, @SecPompeo.
Nothing new happens on 9/20
Just 𝙍𝙀𝘼𝘿 Res.2231
Bolton—who convinced the boss to order you to “CEASE US participation”—did.
In his words:
-Process is not “simple”, automatic or snappy. But intentionally “complex & lengthy”
-US is 𝙉𝙊𝙏 a participant. pic.twitter.com/r01YWdV0hp

​Dunn admits that “the existing American sanctions have been quite effective in closing Iran off from normal trading relations with anywhere that trades more significantly with the United States”, but he does not see “what coercive force” a new batch of US restrictions can have for any government.

“There are of course always lawyers in America who will argue for anything for which they are paid, but I don’t think this is an idea which can have emanated from the legal staff of the State Department”, he suggests.

Although the policy of maximum pressure has done a lot of damage to Iran it has not crushed it, the British professor acknowledges, adding that other countries do not appreciate the ineffectiveness of the Trump administration’s Iran strategy.

According to Marandi, any new US sanctions “won’t make any difference for Iran, because America is already using the maximum pressure. When it’s maximum, that means that is as far as it goes, they sanction everything that they can sanction”, elaborates the Iranian academic. “Any new sanctions will basically be a repetition of the old sanctions, just as everything that we have seen in the last few months or the last year, just repetition of previous sanctions, so nothing is going to change, no matter what Americans do”.

In November 2018, the Trump administration officially reinstated all restrictions against the Islamic republic which had been lifted before the White House pull-out from the Iran nuclear deal. In April, the US banned the Islamic Revolutionary Guard Corps (IRGC) and designated it a terrorist organization, while in June and July 2019 Washington imposed economic and travel restrictions against top Iranian officials. In subsequent months, the US targeted the Iran Space Agency, the Central Bank of Iran (CBI), the National Development Fund of Iran (NDF) and the country’s construction sector. In addition to this, the White House proceeded with punitive measures against foreign companies conducting business with Iran.

The unfolding situation appears to benefit Iran, in the sense that it isolates the US even further, opines Seyed Mohammad Marandi.

The UN Security Council’s unwillingness to reinstate sanctions against Tehran may further weaken Washington’s posture, according to the Iranian academic.

Earlier, in mid-August, the UNSC considered US draft resolution (S/2020/797) aimed at indefinitely extending existing arms-related restrictions which are set to expire in October. The US draft failed, however, to obtain the required number of votes to be adopted.

Announcing the resumption of “virtually all UN sanctions” against Iran last week, US Secretary of State Mike Pompeo specifically elaborated that “the United States took this decisive action because, in addition to Iran’s failure to perform its JCPOA commitments, the Security Council failed to extend the UN arms embargo on Iran, which had been in place for 13 years”.

“This is a political victory for Iran which doesn’t bring bread to the table, but in the long run it helps weaken American hegemony, alongside other issues”, the Iranian academic observed.