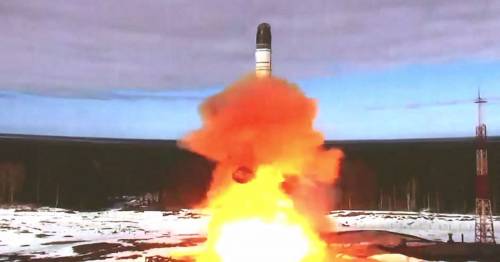 An alarming new nuclear threat has been issued against the West in the form of Putin’s RS-28 Sarmat intercontinental ballistic missile (ICBM) nicknamed “Satan-2” – but how worried should we be?

Aleksey Zhuravlyov, Russia’s defence committee deputy chairman, has suggested the deadly weapon could be unleashed by Moscow to strike back at Sweden, Finland and at the UK and US.

The threats came as Zhuravlyov was interviewed by state broadcaster TV Russia 1 about Sweden and Finland’s aspirations towards joining NATO, as the war in Ukraine rages on.

The threat of engaging Satan-2 was aimed at NATO, the military alliance to which Russian president Vladimir Putin has long been hostile, and was prompted by its growth.

“If Finland wants to join this bloc, then our goal is absolutely legitimate – to question the existence of this state. This is logical,” Zhuravlyov said.

“If the United States threatens our state, it’s good: here is the Sarmat for you, and there will be nuclear ashes from you if you think that Russia should not exist. And Finland says that it is at one with the USA. Well, get in line.”

Zhuravlyov went on to make bold claims about the firing capabilities of the missile, rejecting the idea that Russia would need to establish a nuclear base closer to its Finnish border in order to achieve the aforementioned “nuclear ashes”.

He said the Kremlin would be able to hit Finland with a Sarmat from Siberia and could even reach the UK, The Independent reports.

On the Finnish border, Russia would not have strategic weapons but rather “Kinzhal-class ones”, he said, that would reach Finland in 10 or 20 seconds.

The Satan-2, technically called the RS-28 Sarmat, is a super-heavy intercontinental ballistic missile (ICBM) the height of a 14-storey tower block and capable of speeds over 15,000 mph and a range of more than 6,000 miles.

A view of damage at the checkpoint of Kharkiv
(

On April 20, the Satan-2 was launched amid huge rocket flames from an underground silo at Plesetsk military cosmodrome in the north of Russia.

At the time Putin said it would ensure Russia's security and make "those fierce people who are trying to threaten it” think twice.

There would be “no analogues to this weapon in the world for a long time to come”, he said.

The missile was developed as a successor to the original “Satan” ICBM.

This weapon, otherwise known as the R-36 or Voevada, dates from the Soviet era and could carry only 10 warheads and cover a range of 6,340 to 9,940 miles, according to US Center for Strategic and International Studies data.

Putin’s administration’s test firing of Satan-2 earlier this year saw the missile launched from the Plesetsk Cosmodrome in the north and declaring that its “practice warheads” struck assigned targets at the Kura Missile Test Range on the Kamchatka Peninsula.

However, the demonstration was largely seen by foreign defence analysts as political posturing ahead of Russia’s May 9 “Victory Day” celebrations.

Zhuravlyov’s comments come after months of threats from Putin and his cronies around the possible launch of the weapon.

Earlier this month, after air space was closed by three NATO countries to prevent top diplomat Sergei Lavrov visiting Belgarde, the head of the Russian space agency Dmitry Rogozin referenced the weapon as he hit back at the military alliance.

While Bulgaria, Romania and Montenegro could stop his plane, they would not halt a 208-ton, 15,880mph Sarmat missile – a.k.a Satan-2, he said.

He tweeted: ”Do you know what is so good about Sarmat [ballistic missile]?

“It will not ask for a flying permit from Bulgarian cowards, vindictive Romanians and Montenegrins – who betrayed our joint history.”

The same would apply to the Swedes who are set on joining NATO, he said.

Rogozin’s message brought a hail of abuse aimed at the outspoken space chief along with memes ridiculing him.

“Judging by your army performance, a missile aimed at Bulgaria will fall somewhere by Irkutsk [in Siberia]’, said one response.

Another told him: “Can you please stop typing in Cyrillic … Bulgarian cowards do not want trash like you using their letters. Glory to Ukraine.”

Another critic said: “You write about the beauty of Sarmat that kills people. Are you out of your mind?”

Britain has so far dismissed such talk as being empty threats. Julian Lewis, chair of the House of Commons’ Intelligence and Security Committee, said: “Russia and the Western nuclear states have had the ability to annihilate each other ever since they acquired strategic nuclear bombers, followed by intercontinental ballistic missiles, over 60 years ago.

“Putin adding this new missile to his pre-existing ‘overkill’ capability makes absolutely no difference to the effectiveness of our Trident nuclear deterrent submarines.”

Previous : Man’s fury over ‘monstrous random bat tower’ which appeared metres from his home
Next : Frail Brit accused of killing wife in suicide pact turns to ‘skin and bone’ in jail – World News