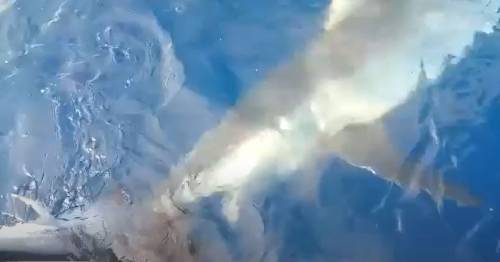 A huge shark hungrily devours a large tuna hanging from the side of a fishing boat to the shock of those onboard.

The beast, believed to be a mako, is seen approaching the alluring meal from the depths of the crystal clear water.

Before anyone can react in time the fisherman’s catch is in its powerful jaws as it viciously moves from side to side in a bid to rip the carcass in half.

One of those on board is heard saying: “It’s coming from below, what a beast.”

The ten foot beast swims away before reappearing and tearing at the flesh of the hanging fish.

The brief clip has been widely shared in Spain as a warning of swimming dangers, despite it being believed to have been filmed three years ago.

The huge shark was seen devouring the tuna
(

Earlier this month a monster great white shark was spotted swimming near a family of holidaymakers in a heart-stopping clip.

The group were on a boating trip near Cape Cod, Massachusetts, when the beast was seen – sparking terror among beach-goers.

A family-of-five rented a fishing boat to catch lobsters when they clocked the 15ft shark beneath the boat.

It was just below the water’s surface footage as the footage by the boat charter firm posted on Facebook showed.

The 10ft shark was seen circling the fishing boat
(

A passenger on the boat is astonished by the size of the giant fish and his amazement is heard on the clip which was posted on Billingsgate Charters ' page.

On the video clip, he says: “Holy smokes, that thing is huge, dude! That’s like 15 feet! That thing is enormous.”

David Stamatis, who owns boating company, Billingsgate Charters told Boston.com he steered the vessel closer to the shark give to allow the family a better look.

“They were thrilled, it made their trip. Not only did they catch a bunch of fish and lobster for dinner — this was an unbelievable bonus,” Stamatis said.

Stamatis revealed it was seen in Cape Cod Bay in around 60ft of water.

He said: “This is a majestic, beautiful, massive animal and to see it up close like that, for those folks it’s a once in a lifetime event.”

Meanwhile a former champion surfer has shared the moment his nephew survived a shark attack as the predators massed beaches in Australia.

Beachgoers were warned of huge sharks stalking swimmers off Frenchman's Beach amid news of the terrifying attack.

Russell Specht, of Stradbroke Island, recalled his nephew's experience and urged tourists to be aware of the hidden dangers as thousands of humpbacks migrate to the east coast.