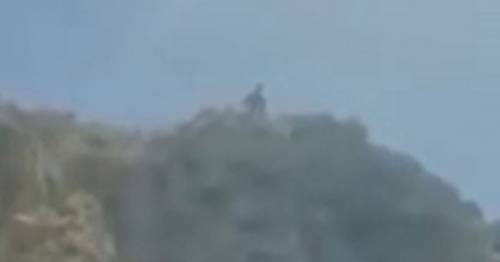 A father was filmed by his horrified family jumping to his death as he hurled himself off a 100ft cliff in a tombstoning stunt.

The holidaymaker is seen standing at the edge of a cliff in Majorca before jumping.

To the horror of his watching wife and son, filming the extreme stunt from a nearby boat, he is seen plummeting towards the sea at the bottom of the cliff.

Tragically, his leap did not have enough momentum to clear the rocky outcrop and instead of splashing safely into the sea, he hits the rocks.

His shocked wife is overheard screaming “oh my god” as the footage ends.

The unnamed victim’s partner and son reportedly received psychological help in the aftermath of the horrifying accident.

Local authorities launched a rescue boat, helicopter and diving team to search for the man.

His dead body was eventually found after a long search of the waters surrounding the islet in the Malgrats Islands.

Majorca has become a popular destination for thrill-seekers who take part in tombstoning, where people hurl themselves off cliff edges and hit the water feet first.

Agencies on the holiday isle specialise in supervising holidaymakers' jumps.

One promises on its website: “The media and press have given a lot of details of people who have tried Cliff jumping (AKA Tombstoning) on their own.

“Would you go bungee jumping if there was no rope attached? Well you should never try cliff jumping without the correct training and back up.

“Our cliff jumping has been specially formulated by qualified professionals in the business who know the sea's and surroundings like the back of their hand. You should never try this on your own.

“Cliff jump in our safe, continually risk assessed locations across the island from Magaluf to Alcudia; cliff jumping is a heart racing experience.”

Tombstoning is especially dangers as it has hidden dangers which may not be apparent from great heights, such as water depths and debris.

People have also suffered cold water shock as their bodies land in the seas.

Every year local councils urge people not to take part in the activities in coasts around the UK in an attempt to put off thrill seekers.

In 2021 a cliff jumper had to be rescued when he tombstoned into the sea and stopped breathing.

The RNLI were also at the scene and were administering CPR to the 23-year-old who was unconscious and not breathing.

Inspector Gavin Howells said at the time: “This incident highlights the serious danger posed by tombstoning or cliff jumping, and the potentially life-threatening consequences.

We urge people not to take part in this sort of activity anywhere along our coastline, and not to put themselves or the emergency services at risk for a thrill.”