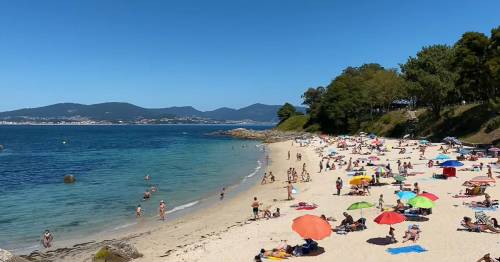 Beachgoers who wee in the sea will be hit with hefty fines, officials in a Spanish city have announced.

City leaders in the coastal location of Vigo in north-western Spain's Galicia region have ruled that urinating "in the sea or on the beach" is now a punishable offence.

The city council has classified the age-old practice as a minor infraction and an infringement of hygiene and sanitary regulations.

To combat the disgusting habit, the city council has said it plans to install public toilets on beaches during the high season.

And if anyone is caught relieving themselves elsewhere, they face a massive fine of up £640 (€750).

Officials are also said to be considering sanctions for other bad habits, such as using soap in the sea, leaving rubbish on the sand, or taking barbecues or gas cylinders to the beach.

The municipality of Vigo includes the Cies Islands, which, in turn, include Rodas Beach, which was once named by The Guardian as "the best beach in the world".

The Cies Islands archipelago was declared a Nature Reserve in 1980.

The islands are also included in the Natura 2000 network of nature protection areas of the European Union.

There are 47 coves and beaches within the Vigo municipal limits.

It is not clear how law enforcement officers will know if someone has urinated in the sea, but they may be on the lookout for people who enter the water up to their waist.

Earlier this year The Mirror warned those heading to the Iberian peninsula should be weary of a range of new fines and laws that now apply.

From keeping your kit on, to where you sleep Brits were also made aware of avoiding accumulating fines which could reach £2,500.

Beachgoers need to be aware of the restriction of the area
(

British tourists are often accused of leary behaviour and drunken antics and the laws have been brought in, partly in an attempt to rein such activities in.

For those heading out to the beach to catch some rays, or returning home were advised to beware of what they are wearing.

Tourists will have to cover up on most public streets or face a fine.

At all Spanish beach showers, it is illegal to wash with soap and shampoo and you can be fined up to £620 if caught doing so.

Peeing on the beach in Vigo, Spain, could now be an expensive business
(

This is because the chemicals in these products are harmful to marine life.

After a long night drinking or partying whilst out on holiday, some Brits might wander down to the beach to sleep off the night under the stars.

However this is illegal and in regions like Valencia can see Brits slapped with a massive £1,240 fine

Camping on the beach is also against the law and could result in the same fee having to be paid.

Peeing on the beach in Vigo, Spain, could now be an expensive business
(

If any Brits go nude on a non-nudist beach, they can expect a stern dressing down to go with a £620 fine.

The biggest fine Brits can be hit with is in regards to beach barbecues.

A bit of a grey area, any Brits hoping to hold one should seek permission beforehand because in some areas such as Salobrena, you can be handed a massive £2,500 fine.