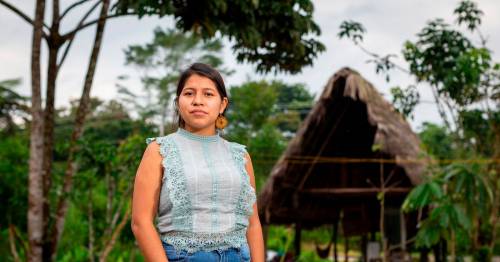 Campaigners say they will fight to the death to prevent oil companies from destroying the Amazon jungle.

Oil companies have been trying to open an exploration site on Ecuador’s Pastaza river for over 20 years, but thanks to the strength of the people defending it, they have failed.

Much of Ecuador’s Amazonian region is divided up into oil blocks, which campaigns say signals the government's plan to continue with oil exploration throughout the rainforest..

The most recent attempt to construct on the river in the area of Block 28 was in 2020 and Rossy Gaibor, a teacher and ornithologist, was involved in the campaign to stop it.

“I am literally willing to sacrifice my life for nature,” she says.

“Because without nature, there is no life. I want to be part of the solution, not part of the pollution. We will continue to fight as long as we are still alive.”

The Pastaza river is of great ecological significance to the area and is home to over 85 species of birds, four of which are endangered.

Block 28 covers an area of 175,250 hectares, 97% of which is located in Pastaza province, and contains estimated oil reserves of 30-50 million barrels.

This directly affects the lands of the Kichwa peoples, an Indigenous Amazonian nationality, which includes more than 73 Indigenous settlements and 43 other communities.

Andrés Tapia is the director of communications at the Confederation of Indigenous Nationalities of the Ecuadorian Amazon (CONFENIAE) and is part of the campaign against Block 28.

He told how the oil companies tried to bribe people with school uniforms and other supplies.

“They dedicated themselves to positioning their presence by handing out backpacks in schools and school supplies to legitimise themselves and that is when we knew their true intentions to exploit block 28,” the 39-year-old says.

Andrés Tapia, director of communications at the Confederation of Indigenous Nationalities of the Ecuadorian Amazon
(

Marlon Vargas, president of CONFENIAE, adds how the coronavirus pandemic caused people to panic and accept help from the oil companies, which the company then claimed was the people’s consent for the oil block to go ahead.

“There are some comrades who get convinced by the offer of the oil or mining companies that they’re going to stop poverty,” he says.

“Many of our people are naively falling for it, they even are in favour of the companies. What did the company that wants to exploit Block 28 do? They began to deliver school supplies, uniforms, scholarships, among others.

“So people thought, we are in an economic crisis due to the coronavirus, we must support our people.

“Since they do not have resources, they accepted their offerings and signed in favour of oil exploitation in Block 28. And that’s what the company passes as consent. But that is unfair.”

This pocket of the Amazon is densely populated and is a big attraction for tourists who seek the clear waters for watersports.

“People survive in this corner of the Amazon because of clean waters, perfect for rafting and much sought after by tourists, which are not found elsewhere in the region,” Andres says.

“The income generated by ecotourism is highly valued, and means the local population as a whole is very keen to adopt and promote conservation efforts.

“The men and women of the forest, whether Indigenous or peasants, have a long-lasting familiarity with and deep knowledge of these remote territories, such is the strength of their relationship with the rivers and the forest.”

The oil companies involved did not carry out any legal consultations with the people before starting the exploration process, but thanks to the mobilisation of the huge campaign, they were stopped just in time.

Andres adds: “The historical position of Pastaza, of the nationalities and of the social sectors has been against oil exploitation which is why it is one of the only provinces that is not directly affected.

“With videos, social media, public assemblies, and press conferences we were constantly talking about the meaning of Block 28 exploitation.

“Even during the pandemic, we held assemblies so that the authorities could sense the rejection of the people of Pastaza to even the possibility of exploiting Block 28.”

Because of the community's resistance, the exploration of Block 28 stopped and the companies involved retreated.

The people of Pastaza continue to defend their land and vow to fight anyone who tries to destroy it.

Rossy adds: “Block 28 would have been an unprecedented ecocide since it would have left us without water not only in the upper Amazon, but also in the lower Amazon, and everything that follows.

“This is an example of when the people unite, the voice of the people is commanded.” 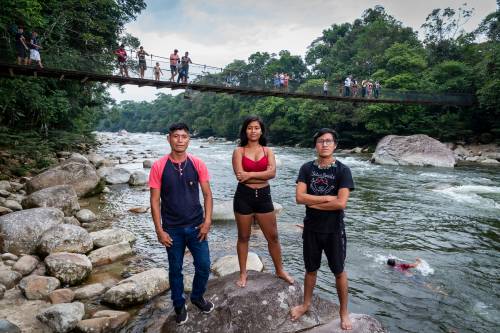 Over the course of a year, NextGen International has told the stories of 35 young people living on the climate frontlines.

We have worked with youngsters aged 11 – 25 in the Solomon Islands, Nigeria, Nicaragua, Nepal, Mongolia and Ecuador.

There have been tragic stories, like 13-year-old Rumaisa whose baby sister drowned in flash floods in Nigeria, but also uplifting accounts of young people coming together in an effort to tackle the climate emergency.

Our charity partners Save the Children, Raleigh International and Hivos have worked with the Mirror on the project.

Previous : Mum had 2 mins to say goodbye to baby who died as she was wrongly arrested for neglect
Next : Couple sue their son for £500,000 because they haven’t had a grandchild – World News