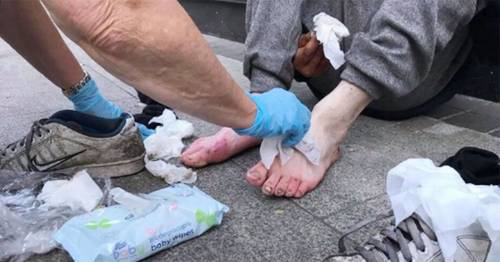 The touching image shared by ‘The Homeless Street Café’ shows workers tending to a man's feet.

It serves as a harsh reminder of the side of Dublin city centre in Ireland that remains after everyone else has gone home.

The group’s Facebook page's poignant photos have often shone a light on the deep injustice in the Irish city.

In 2019, a picture of a five-year-old sitting on a sheet of cardboard while eating carbonara received an overwhelming response.

They said: "This poor unwell young man circled around us quite a bit but the crowds unnerved him.

"His feet destroyed with old and new cuts, dirt and blisters."

The volunteer group go on to explain that the man’s runners did not fit and that he was constantly robbed because of his vulnerability.

In this shocking case, the volunteers cleaned the man’s feet gently and applied cream to some of the open wounds.

He was given a pair of winter boots to replace his ill-fitting runners with the group expressing their sadness after meeting the man.

“Someone’s son, brother, friend in such an awful way. It’s one that will stay with us.”

The organisation admits that they “ran out of every morsel of food and drink”, as crowds flocked to their stand outside Dunnes Stores this week.

The gang consists of volunteers that offer food, toiletries, clothes and friendship to Dublin’s homeless.

Their table can be seen every Tuesday night on Grafton Street from 8-11pm.

Previous : Inside outrageous FBI sting that tricked gangsters into texting spies about murder plots – World News
Next : Girl with ‘batman’ birthmark forced to stop treatment abroad after visa runs out