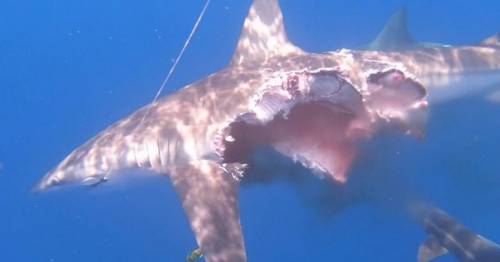 A ‘zombie shark’ has been spotted still hunting for prey despite being half-eaten by other sharks when it was released into the sea by scientists.

Dr Mario Lebrato, 35, released the oceanic black tip shark into the sea off the coast of Spain before a group of fellow sharks set upon it, inflicting fatal injuries to the unsuspecting animal.

According to the scientist, these included several bull sharks, which can weigh up to a whopping 400kg.

Despite the onslaught however and a large portion of its body missing after it had been bitten off, the shark continued to fight for its life and tried to swim away.

Dr Lebtrato explained that the shark struggled for around 20 minutes before eventually succumbing to its injuries.

He said: “Sharks eat sharks, that is well known, but it is super difficult to film and document.”

Earlier this year a great white shark was caught on tape flying through the air to attack its prey.

In the clip, filmed for National Geographic's Big Sharks Rule, the marine predator is skulking under the surface of the water, perfectly camouflaged, when it spots a group of seals.

The seals try to stick together but eventually get separated and the shark seizes its moment for attack.

Putting on a terrifying turn of speed, the apex predator shoots up from below with its jaws wide open, revealing its hundreds of razor-sharp teeth.

Dr Mario Lebrato, 35, pictured, released the oceanic black tip shark into the sea off the coast of Spain

It knocks the seal skywards while crunching down with its powerful bite.

The shark then flies through the air with the seal in its jaws, turning horizontally mid-leap before landing with a huge crash back in the water.

Previous : Woman mauled to death by her own dogs after they ‘turned on her’ – World News
Next : Experts reveal exact date to get a Covid booster jab for protection at Christmas