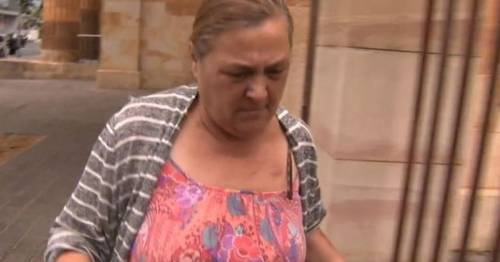 A gran is facing deportation to the UK after going to disturbing lengths to cover up the murder of her son's fiance.

Jody Meyers' family say the move to deport Margaret Archer from Australia is a moment to celebrate.

Michael Bates, the gran's brother-in-law said he is "happy" she is being sent to the UK

"We don't have to be looking over our shoulder. We don't want to have to see that face."

Police searched for 20-year-old Jody Meyers in 2015, but Archer was then coaxing her son Neil to make up a lie.

Margaret Archer is being sent to the UK by Australian authorities
(

They claimed Meyers wanted to leave her fiancé and their toddler son and disappear from their home.

A text message was also sent from Meyers' phone to back up the story.

Neil Archer, however, had strangled his partner and helped hide her body.

He later returned the next day to hide the grave with concrete with cement bought by his mum.

After pleading guilty to murder, he was given a life sentence with a 22-year non-parole period.

His sentence hearing was told he was abusive and controlling in his relationship.

The 55-year-old used Meyers' bank card to buy bags of cement which he used to bury remains of the victim beneath a shed of the Margaret Archer's property.

Bates said supporting someone to cover up a murder of a relation was a different level.

Michael Bates, the gran's brother-in-law said he is happy Archer is being sent to the UK
(

Neil Archer was given 22 years in jail for Meyers' murder.

His mum was given six-and-a-half-years in jail which was served before this week being released from prison.

Margaret Archer pleaded guilty in January 2018 to assisting her son Neil, who is serving time for murdering Jody Meyers

The 57-year-old also gave her family false hope after sending text messages from her phone to her family.

Her body was discovered under a shed at Margaret Archer's property after she was reported missing.

She pleaded guilty to helping her son but showed no emotion during sentencing after which she served a non-parole period of four years.

Archer can continue life in the UK after she is deported by Australian authorities but Mr Bates said his family struggles with her actions and what she did.

They are not able to see Jody Meyers at Christmas or birthdays.

And they say Margaret Archer can still celebrate her own.

Margaret Archer, the South Australia Corrections Department confirmed was handed over to the custody of border force.

There were no specifics of when she will be flown out of Australia.

A spokesperson for the department told the news site it is unable to comment on individual cases.

Previous : Russia forces everyone in occupied eastern Ukraine to pay £200 each to fund war – World News
Next : Terrified woman and dog trapped alone in canal for 18 hours after getting stuck