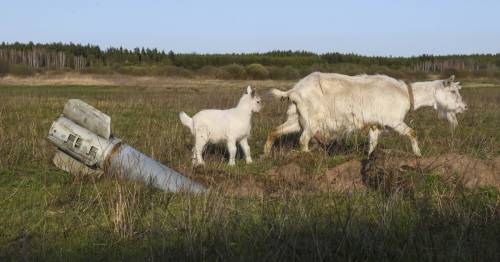 A goat has wounded multiple Russian soldiers after it set off a boobytrap of grenades.

The animal triggered tripwires set up by Vladimir Putin's forces setting off a series of explosions which injured the invading soldiers.

Kremlin forces were hurt after their traps were detonated in Kinski Rozdory, Zaporizhzhia.

The Russian soldiers had also placed grenades around the outside of a Ukrainian hospital with tripwires installed in a circle as a means of defence.

After they had set the trap, an escaped goat wandered in the direction of the hospital and set off the grenades.

The fate of the goat, which had escaped from a nearby farm, is not known.

He also added that Moscow's air and land attacks aim to destroy the whole Donbas region.

The invading Russian forces targeted southern and eastern Ukraine after it tried to advance on Kyiv in the early in the conflict which met fierce Ukrainian resistance.

The war in Donbas is most critical in Sievierodonetsk and Lysychansk, which bridge the Siverskyi Donets River in Luhansk province.

Oleksiy Arestovych, an adviser to Zelensky said the battle there is "entering a sort of fearsome climax".

Civilians in their hundreds are trapped in chemical plant in Sievierodonetsk while the battle continues to control the city.

Moscow says Ukrainian forces in the city are surrounded and trapped. But Luhansk Governor Serhiy Gaidai told Ukrainian Television on Wednesday that Russian forces did not have full control of Sievierodonetsk.

Gaidai said all Lysychansk was within reach of Russian fire.

"In order to avoid encirclement, our command could order that the troops retreat to new positions. There may be a regrouping after last night," he said.

Russian-backed separatists claimed Lysychansk was cut off from supplies a connecting road to Sieviersk was taken.

The claims have not yet been confirmed

But the defence ministry in Britain said some Ukrainian units had withdrawn to prevent forces being encircled.

It said: "Russian forces are putting the Lysychansk-Sievierodonetsk pocket under increasing pressure with this creeping advance – however, its efforts to achieve a deeper encirclement to take western Donetsk Oblast remain stalled."

Kyiv said shelling is making life "hell" and insisted fighters in the ground would hold on "as long as necessary".

Sergiy Gaiday, governor of the Lugansk region, wrote on Telegram: "The Russian army is… just destroying everything. It's just hell out there,"

"Our boys are holding their positions and will continue to hold on as long as necessary."