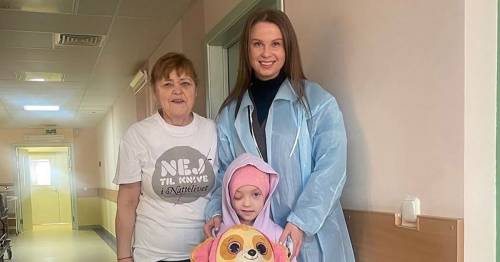 Girl, 5, blinded by bullet to skull and orphaned as family massacred by Putin’s troops – World News

A five-year-old girl who survived being shot in the skull as she and her family fled invading Russian troops in Ukraine has been left blinded and orphaned.

Tragic Nastya Konchakovkaya lost her mother Tanya and father Oleg, as well as her 18-year-old half brother Nikita, who were all shot dead by the soldiers, with only her grandmother Vasilina and the tot escaping with their lives.

The full horror of the little girl's ordeal has been revealed as she has reached Germany and awaits eye surgery.

Video footage has emerged of the minibus which the “happy and loving” family were travelling in when they were shot at by invading Russians concealed in a forest.

A Ukrainian TV reporter filmed their bullet-riddled minibus five weeks after the horror but could not get too close for fear the Russians had left land mines behind.

Nastya with her grandmother Vasilina and relative Anastasia
(

The corpses of Tanya and Nikita were still inside and the journalist mistook them for a young couple.

“They shot into the windscreen, and the people were killed. I can’t get closer, I have to wait for de-miners first.”

Tanya and Nikita were identified later by Oleg’s adult children from a previous relationship.

Oleg’s body lay in the road for a week or more then disappeared.

Anastasia Mizetskaya, a US-based relative who lives in Brooklyn, had been in touch with the frightened family as they fled.

She said: “Tanya said they were trying to make sense of it all, and then messaged to say they were moving to her brother’s house some 20km from Bucha, planning next to go to the west of Ukraine.

“On 27 February she messaged to say there was a lot of shelling.

“They were sitting inside her brother’s house, lights switched off, and saw Russian military equipment driving past, lots and lots of it.

“I think they must have been terrified, without electricity, water and mobile coverage, and this made them decide to get back to Kyiv.

“They chose what seemed to be a quiet route, away from military tracks… but it wasn’t.”

The family's vehicle was covered in bullet holes
(

The grandmother managed to pull Nastya out of the minibus but she could see a bullet in the child’s head, and saw her daughter, son-in-law and grandson had all been killed.

Vasilina said: “I survived because I was in the back of the minibus.

“Little Nastya was on the floor in the cabin, I really struggled to pull her out.

“It was about 11am when it all happened, Nikita’s watch had stopped at this moment.

She even confronted the killers as she sought to save Nastya’s life.

She said: “They were hiding in the woods, the people who attacked us. I jumped out and yelled: ‘Why, why have you done it?’

“And this [Russian] walked out and said: ‘We thought you would attack us. You Ukrainians, you drive your cars armed with machine guns, and attack us’.”

The little girl and her granny were taken to Belarus where surgeons opened her skull to remove the Russian bullet.

“The medical team was incredible. They had to open her skull, and now she has a zigzag shaped scar, and took the bullet out.

“The children's neurosurgeon who [operated on her] said it was the first time in his life he took a bullet out of a child’s head.

"The entire hospital was shocked to their bones, they walked around shaken.”

Nastya has not yet been told the truth about what happened to her parents and half brother.

Previous : Revolutionary new non-invasive prostate treatment is being rolled out across the UK
Next : Controversial Champions League plan to benefit Premier League clubs may be axed by UEFA