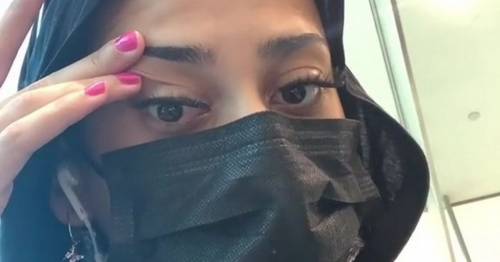 Following a decade-long catastrophic civil war fought between the Syrian Armed Forces and its allies, rebel fighters, and the Islamic State, Syria has been left in a serious humanitarian crisis with a large portion of the country left shattered.

The U.N. has estimated that 13.1 million people are currently in need of urgent assistance, as civilians have seen their homes wrecked by the fighting.

Nevertheless, with the Syrian Democratic Forces officially declaring final victory over the Islamic State in Baghuz Fawqani on 23 March, 2019, marking the end of ISIL-controlled territories in Syria, people have slowly started to rebuild their lives.

Sedrah, 16, documented her return to Syria in an emotional TikTok video
(

“It was such a beautiful country, it's unbelievable what happened," Sedrah said
(

Such is the case for Sedrah Altatari, 16, who recently travelled back to her home country from Canada.

Sedrah documented her return to Syria in an emotional TikTok video where she captured the moment she was faced with her war-torn childhood home.

The video, which has now been viewed by 1.3 million people, sees the teenager filming herself wearing a mask on the flight along with the caption: “Visiting home (Syria) after 10 years of civil war”.

The U.N. has estimated that 13.1 million people are currently in need of urgent assistance in Syria
(

The clip then transitions into a shot taken from a car during her journey before seeing Sedrah walking in her former neighbourhood, visibly damaged from the tragic conflicts.

Her video goes on to show various glimpses of her house, ravaged by bullets and bombs.

The brave girl also shared the heartbreaking moment she found the Quran ripped apart in her home.

Sedrah captioned the video: "It was sad seeing the Quran in the washroom but I obviously picked it up"
(

She wrote: “The Quran ripped and thrown in the washroom.”

The short video also sees some personal items including a DVD of the Bee Movie and children's gloves left on a dusty table.

Sedrah captioned the chilling moment: “The only thing left is the butterfly wall.

The clip goes on to show a gorgeous view of her hometown with a sunset shining behind mountains along with a beautiful Mosque, before ending with a little girl walking down the stairs of a dark and run-down alley.

"My heart skipped a beat, I'm so sad looking at this," one TikTok user commented
(

Her childhood home belongs to her father
(

Sedrah told The Mirror: "I’m full Syrian from the suburb of Damascus and I might have some Turkish ancestors.

“I wanted to visit home to see all the memories left behind and to also see my dad's side of the family, we’re really close."

The house shown in her TikTok video, which belongs to her father, is where Sedrah grew up before moving to Canada along with most of her family.

“My reaction was devastating,” Sedrah revealed when asked about how she felt seeing her childhood home in such a disastrous state. "I was really sad and overwhelmed with everything that went on.

“I had to walk through the streets of my town knowing that there were people getting tortured, killed and raped on the streets for no absolutely reason.

“Syria was rated as the fifth best country in the world due to its nice weather, how cheap it was and how beautiful the country was, but right now it’s rated as the worst country.

“People from all around the world would come down to visit Syria and my grandparents would rent houses to many people who would come visit.

“It was such a beautiful country, it's unbelievable what happened.”

Sedrah does not plan on moving back to Syria but she does, however, hope to start visiting more in the summers to come, as she says she enjoys visiting the country’s capital (Damascus) and other big cities.

Despite a bittersweet and poignant journey, the Sedrah remained positive and hopeful as she posted another TikTok showing her visit to Damascus, highlighting some of her best experiences.