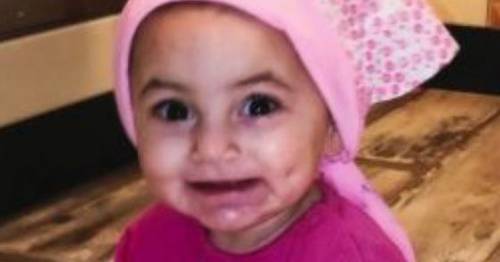 A one-year-old girl was kidnapped from a child protection centre by her parents after they lost custody over her father's violent behaviour, it has been reported.

Medina was snatched on May 3 by Lintone Saljihi, 17, and Mustafa Hrustic, 20, and they are still on the run.

Details surrounding the kidnapping were only released by authorities yesterday.

It has been reported Medina was taken away from her parents because of Hrustic's violent behaviour.

He allegedly beat both his wife and daughter repeatedly before the state took Medina into protection.

Saljihi stayed with Hrustic despite the alleged violence and was permitted to visit her daughter at the centre in Cologne, Germany, but only under strict supervision.

Lintone Saljihi, 17, is said to have snatched Medina while on a supervised visit to the centre where her child was staying
(

Saljihi went to visit Medina on May 3 and took advantage of a moment where a guard briefly looked away to escape with the girl, according to the authorities.

She is said to have run out of the building with Medina in her arms and jumped into a car that Hrustic parked just outside the clinic before driving off.

They have not been seen since.

Medina was taken away from her because her father Mustafa Hrustic, 20, allegedly beat her and her mother
(

Their phones have not been used since Medina was snatched and authorities have not found any leads in the asylum shelters in the area.

The police statement added that Hrustic appears to have his wife "under his control".

The couple's family who lives in Cologne are reportedly refusing to cooperate with the police.

The cops added they have family connections all across Europe, but did not confirm whether the search will be widened beyond Germany's borders.