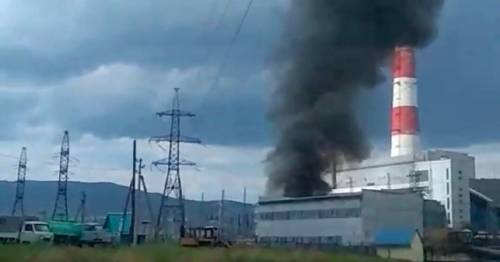 A blackout has swept across parts of Russia after a giant explosion at a power station.

A fire erupted at Gysinoozerskaya Hydro-Power Plant from an unknown cause.

A huge column of smoke was seen rising from the power station in the region of Buryatia.

An eyewitness said: “There was an explosion at the Gusinoozerskaya HPP.

“There was a clap first, and then the sound reached (us) and there was a loud bang.”

He spoke of a noise “like a plane is taking off,”

So was Krasnokamensk in TransBaikal region, home to Priargunskoe chemical plant – the largest uranium mining enterprise in Russia.

The explosion was near a uranium mine
(

It was initially unclear if the plant itself was hit by the outage but electricity and mobile connects were down in the city.

The incident is the latest at major Russian plants and facilities during the period of the war in Ukraine.

It is unclear if there is a connection but there has been speculation on sabotage.

The press service at Gusinoozerskaya said “spontaneous damage to the transformer” occurred, which caused the shutdown of all power units of the station that were in operation.

Several major Russian facilities have exploded throughout the war with Ukraine
(

Officials confirmed there were no casualties
(

"In the coming hours, the restoration of the operation of power units at both power plants is expected.

"There were no casualties as a result of the incident."

It comes after a major Russian oil refinery was struck by Ukrainian drones yesterday.

The military unmanned flying vehicle was seen low flying to the facility.

A huge explosion was heard ten miles from the Novoshakhtinsk oil refinery in Rostov region, which borders Ukraine, some four miles inside Russia from the pro-Putin puppet state Luhansk People’s Republic.

Flames were visible and black smoke poured from the key strategic facility.

Russian air defences failed to pick up the incoming drone, initially reported to be Turkish-made Bayraktar, but later said to be a Ukrainian UAV PD-1 or PD-2.

Some reports said the visible drone was one of two which targeted the facility.

It caused the explosion while another lay on the ground between two giant oil tanks.