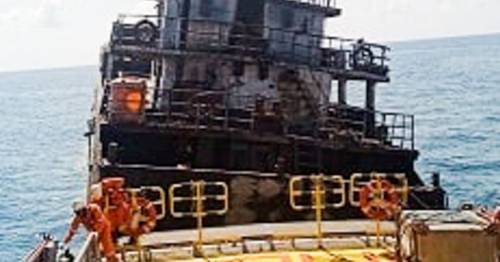 An abandoned 'ghost ship' was found floating in the middle of the night.

The ship, labelled 'Jin Shui Yuan 2' in Chinese characters, was reportedly of unknown origin and had no crew, cargo, or identifying documents on board.

But it sank due to rough seas and strong winds near Sichon District in Nakhon Si Thammarat province while being towed by the Thai navy on Sunday.

The ship is labelled 'Jin Shui Yuan 2' in Chinese characters
(

Local authorities have coordinated with the marine department to keep the one-kilometre-wide oil leak from the shipwreck from harming the environment and spreading to nearby holiday islands.

Buoys were also placed to mark the area where the ship had sunk. Fishermen have been alerted to be careful while sailing.

A notice has been issued to the ship's owner to salvage the vessel within 15 days.

The ship was spotted was about a hundred nautical miles from the mouth of Songkhla Lak, Thailand
(

Any owner has a short window of time to claim the ship which was found at nightfall.

The crew investigating the ghost ship used head torches to guide them towards the wreck which appeared as if it was listing and may need rescued.

The ship's abandoned bridge looked like it had been left in a hurry when authorities found it.

Workers prepare to board the ghost ship
(

Authorities managed to secure a ladder and climb aboard from their own vessel, but found an empty space inside eerily floating alone with no-one to be seen.

A stairway to the downstairs galley suggested it had not been used for sometime.

There are fears the ghost ship could create an environmental catastrophe. through oil spillage leaking from the vessel.

If the owner claims the ship, authorities say they will have to pay to get the ship back.

Captain Itthipat Gavinfuengfukul said: "We have been trying to bring the ship to shore, but it sank before we could reach it.

"Buoys have been deployed at the point where it sank. The ship is 18 metres from the water's surface and about 28 nautical miles from the coast of Sichon district."

Authorities onboard the abandoned vessel
(

The abandoned bridge, but no skipper
(

He added that the vessel owner, if they come forward, would have to pay to claim the tanker.

The Centre for National Marine Interest Region 2 will be investigating the matter further.