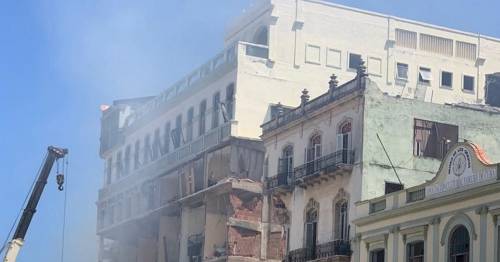 At least 22 people have been killed and more than 70 injured in a massive explosion at a popular hotel in Havana, Cuba.

The blast at the well-known Hotel Saratoga appeared to have been caused by a gas leak, according to Cuban President Miguel Diaz-Canel.

Speaking from the scene of the disaster on Cuban television, President Diaz-Canel also ruled out any speculation that it had been caused by a bomb or an attack.

The explosion tore a gash in several floors high into the side of the building.

State TV said the blast was "not a terrorist attack," adding that the hotel was closed and only workers were inside at the time of the explosion citing Roberto Enrique Calzadilla, a representative of the military-run company that operates many of the country's hotels.

In a broadcast interview, Calzadilla said the 96-room hotel had been set to re-open in the next few days and that the workers on site were making final preparations. He also pointed to a gas leak as the possible cause of the tragedy.

"The workers were… making repairs and doing all the work to open the property and in the morning they were resupplying the gas and it seems some accident caused an explosion," he said.

One child from a nearby school had died and least 15 others were reported injured from the blast as of late Friday evening, according to the health ministry.

Debris is scattered after an explosion destroyed the Hotel Saratoga, in Havana, Cuba
(

Juan Carlos Garcia, the country's tourism minister, said initial reports suggested no foreigners had died or been hurt in the explosion.

While search and rescue efforts were ongoing, it was unclear if additional victims remain trapped in the rubble.

Cubans saved some of the people who had been left under the rubble minutes after the blast as videos emerged of locals trying to rescue the wounded.

Images from the scene showed the blown-out facade as plumes of dust and smoke were be seen rising around the debris on the ground.

Photos from Granma, the Communist Party's official daily, showed images of the hotel with walls apparently blown out.

Previous : Piers Morgan urges viewers to watch his new TalkTV show after weekly ratings plummet
Next : When will local elections 2022 final results be announced? Count times for every council