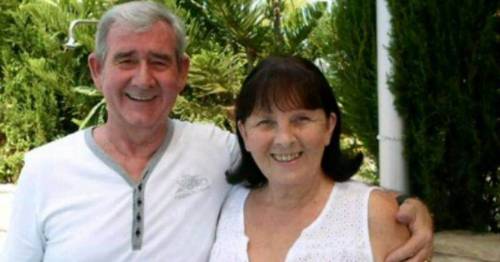 A former miner awaiting trial in Cyprus for the murder of his ill wife in an alleged suicide pact has told how he lies alone in his cell and wonders how it happened.

Speaking for the first time, David Hunter, 75, told the Mirror in a Paphos court that he has “blank spaces” in relation to the death of wife of 52-years Janice in December.

David, from Ashington in Northumberland, is accused of her pre-meditated murder, and lawyers previously failed in their bid to get the charge downgraded to assisted suicide.

Janice was diagnosed with blood cancer in 2016 and had “begged” David to end her life, their daughter previously told the Mirror.

He is alleged to have suffocated Janet before taking an overdose of prescription pills, but was found and survived.

Lesley Cawthorne from Norwich, the daughter of David Hunter
(

On Thursday, ex-colleagues from Northumberland, where David worked as a miner, arrived in court to support their old pal, who has remained in a Cyprus jail since he was arrested.

David faces life in jail if he is found guilty of premeditated murder.

But the trial at Paphos District Court was adjourned until September and judges refused bail.

Before he took the stand he sat behind his lawyer, where he chatted for up to five minutes.

He appeared skinny and frail, and pal Barry Kent, 66, who also visited in April, said he had “gone downhill” in those two months.

Kevin Barnfather, 58, who travelled with Barry, stood and gave David a warm hug and kissed him on the cheek as the 75-year-old was led from court after the adjournment.

Tears welled up in David’s eyes during the embrace as he thanked his friends for their support and shook their hands.

David with his wife Janice and daughter Lesley, back in the 1980s

Janice's grave with flowers laid on it for her birthday
(

Wearing a black shirt, with jeans, trainers and a face-mask, David told us before the hearing got underway: “I’m very grateful for all the support.

“I’m feeling optimistic about the case, thanks to (lawyer) Michael (Polak). I cannot speak highly enough of him.

“It’s not easy, sometimes you’re lying in the bed by yourself, things go through your mind, how it happened. I have blank spaces.”

The case was adjourned until September 19 because a different, ongoing case needed to be concluded, the court heard.

After the hearing, Kevin, who has known David 40 years, said: “I gave him a cuddle there and he was all skin and bone.

“He’s lost a lot of weight. He looks like an old man and a shadow of what he was like. He’s so thin.

“I hate to even think it, but you kind of wonder how long he might have left. It’s a terrible situation.

“Janice was the love of his life.”

Barry said he had to “look away” as David’s eyes welled up, such was the difficulty of seeing what his old friend was enduring.

“He should not be here. That’s the first time I’ve seen him looking so frail.

“What earthly good is it serving keeping him in jail? He’s clearly not a threat.

“The judge said it was because of the gravity of the case. But he’s a shell. Words fail me.

“I will support him and be there for him until whatever conclusion is reached, and beyond.”

He said: “He was disappointed it did not go ahead but he remains determined.

“I’ve told him he needs to eat more. Although he says he is being treated well in prison – prison is not the place for him.”

Barry and Kevin brought David some reading glasses and dominos to help him pass time.

David said before the trial of the conditions in the jail: “I get no trouble from inmates or the guards.

“But it’s boring. My mates have just brought me some dominoes.

“I try to keep out of the sun as much as possible.

“There’s a guy in there who’s been there 22 years for being part of a political party. He’s a decent guy.

“There’s all (sorts of) people in there.

“There are British-Cypriot prison guards who speak English well.

“My daughter’s doing a lot. There’s a lot of support.

“There’s not much you can say. It’s strange.

“I buy phone cards, they’re the most expensive things. And I get books from the library.

David and Janice retired to Cyprus after David’s 40 years down the mine.

Neighbours in Tremithousa, where David and Janice lived, also sat in court to give their support.

Petra Kefling, a 65-year-old German neighbour, said: “For two years his wife was very sick, with cancer. I remember his wife going three to four times a week to hospital for treatment.

“Her whole body got weaker and weaker. I never in my life saw a couple who were so long together and so close. It’s very sad, he’s so thin, he doesn’t look healthy.”

“Her 70-year-old husband, Helmut, said: “They were a lovely couple. They were always together, and he was very proud of her.

“David was always speaking highly of Janice. He was proud of how long their marriage had lasted and he had lots of pictures of Janice which he would always show.

“We never heard a bad word between them. This was the first time I had seen him since it all happened, and he looks in a bad way.

“You could see he was shaking and he looks very stressed. It’s bad decision by the court, he’s an old man, he shouldn’t be in prison.”

Previous : How Russia’s ‘Satan-2’ nuclear weapon could be unleashed to strike back at NATO – World News
Next : Tyson Fury could hold on to world title for 12 months without defending belt