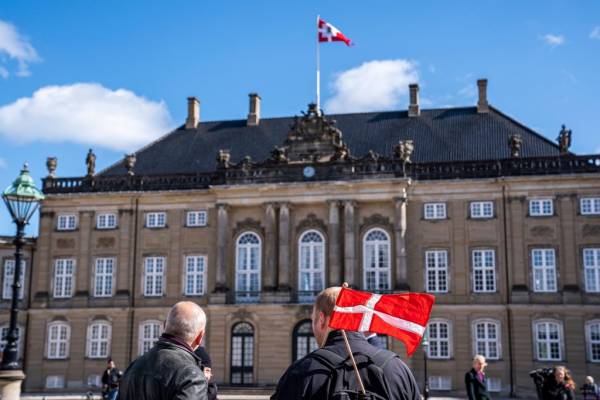 Above the peaceful suburb in central Jutland where I have been seeing out the coronavirus pandemic, the Dannebrog—Denmark’s distinctive white on red sideways cross—is flying high. Every other garden, it seems, has a flagpole. And just as milder spring days have seen flowers burst forth in the nation’s garden beds, so have its flags and pennant-shaped wimples been run back up—a symbol of the deep wells of fædrelandskærlighed (“love of the fatherland”) with which the Danes have responded to the pandemic.

The nation shut up shop on March 12. At 8 p.m., the prime minister, 42-year-old Mette Frederiksen, unexpectedly called a press conference and announced the closure of the country’s schools, universities, child care centers, swimming pools, sports clubs, churches, shopping centers, hairdressers, restaurants, cafés, and non-essential government offices. Three days later, she closed Denmark’s borders with its EU partners Germany and Sweden. The sense since has been one of a kind of folkesamling or “people’s gathering”—of a coming together to draw strength from each other, not as strangers but as Danskere, “Danes.”

A program by the national broadcaster DR on the second Saturday evening of the lockdown captured the mood perfectly. Wrapped in a puffer jacket and seated picturesquely on a log beside an open fire, the show’s smooth-voiced host invited the nation to join her for a bivouac. From there, she cut to the sleek, candlelit kitchens of the nation’s pop artists (themselves in self-isolation across the country) for live performances of Denmark’s greatest hits. It was a national singalong that every Dane could be part of, even amid social distancing. Meanwhile, one by one (and keeping a safe distance at the other end of the log), a stream of television celebrities “dropped in” to talk about who they wanted to thank most. The Queen, Margrethe II? The prime minister? Hospital staff? The children, so cruelly forced to miss classes? (In Denmark, you always thank the children; they are so brave.) Denmark gave the world the concept of hygge (“coziness”); this was the quintessence of it.

Dressed in the modern, relaxed clothing Danes prefer, Crown Prince Frederik, his Australian-born wife Crown Princess Mary, and their four children then joined by video link from the back garden of their Copenhagen palace. Mary asked her children, including her eldest, Prince Christian, Denmark’s future king, to share with the country how they were faring under self-isolation. As the nation’s introduction to a little-known prince who will one day be monarch, it was quite moving.

Lockdown has also uncovered the post-Lutheran habits and attitudes that lie beneath the minimalist surface of modern Danish society. The face of this side of the pandemic has been that of 34-year-old Philip Faber, the sprightly, bespectacled master of the national broadcaster’s girls’ choir who looks like a bearded Harry Potter. In the first days of the lockdown, Faber diagnosed what the nation needed to lift its spirits: half an hour of daily song around the piano, broadcast every morning direct from his living room, three little tea-light candles tastefully positioned on the piano frame.

Ever since, Morgensang has gathered upwards of 200,000 households daily around the television, their singing voices ready. From the more than 1,500 hymns by N.F.S. Grundtvig (1783-1872)—a charismatic, 19th-century Lutheran pastor who founded Denmark’s Højskole movement, a network of short-term, residential “folk high schools” that to this day publishes a beloved and regularly updated national songbook—to more modern melodies, the songs that Faber trills while his fingers run across the piano keys are ones that every Dane of a certain age knows by heart.

In Denmark, nobody doubts that a national culture exists. What the lockdown has provided is an opportunity to induct a new generation.

And one thing Danes don’t do is panic. In contrast with overseas, where we’ve been shocked to see footage of empty, ransacked shelves, Danes have distinguished themselves with their discipline. True, even while Frederiksen was announcing the lockdown, a few Copenhagen hipsters did flock to the capital’s mini-markets to stock up on essentials like organic oat milk and kale. But such “hamstering” (as the Danes call it, invoking the rodent) is widely frowned upon, and within a few hours, even the hipsters had control of themselves. The nation’s toilet paper supply has never been in question. Such discipline has made more draconian lockdown measures unnecessary. Far from empowering the police to fine those “caught” flouting lockdown by going for a walk in the country or sitting on the grass in a city park, Frederiksen has encouraged people to do just that, confident that Danes will heed the rules on social distancing. Precisely because no one has ever questioned the continued supply of food, you can still buy oat milk, kale, or anything else without fear of PC Plod confiscating them as non-essentials.

As a strategy for flattening the infection curve, Denmark’s decisive and orderly shutdown has paid off, with the number of those needing hospital treatment dropping every day for more than a week. As of today, there are 7,515 cases and the death toll stands at 364 out of a population of 5.82 million. Some have suggested that the collapse of Italy’s public health system under the strain of the pandemic proves the weakness of “socialized medicine.” Denmark’s experience couldn’t offer stronger conflicting evidence (though it does suggest that in order to work, a national health care system needs a strong national culture). Every Dane and permanent resident has an automatic right to free health care, from the GP to the intensive care ward. But of the 1,240 ventilators available in the country’s public hospitals, only 85 are currently in use, and with so much slack clearly available in the health system, an Italian- or Spanish-style catastrophe has been averted. (The first measures cautiously lifting the lockdown by re-opening primary schools and kindergartens began on Easter Wednesday.)

Understandably, the prime minister’s approval rating has soared. Elected without great enthusiasm only a year ago after what most agreed was a generally lackluster election campaign, Frederiksen leads a minority government of Social Democrats with the legislative support of a smaller “red bloc” (i.e. left-of-center) parties. With 78 percent of Danes approving of her performance, Frederiksen now has the country at her feet like few prime ministers before her. Indeed, her straight-talking, suit-pants and hair-bun style has come to embody the disciplined, methodical approach Denmark has taken to the pandemic.

In Frederiksen, the pandemic has revealed changes beneath the surface of Danish society. One of these is the shift in political power and cultural influence away from the 1968 generation of student rebels-cum-third-way liberal “centrists” in the 1990s, who led a generally reluctant country into the 1992 Maastricht Treaty and 2007 Lisbon Treaty, which transformed the European Economic Community into a political union. Instead, it has flowed into the hands of a new generation, whose competence, it seems, the government’s handling of the pandemic has vindicated. Frederiksen (a divorcee, mother of two, and career politician who was forced by the virus to delay her planned remarriage for a second time) was born in 1977, the finance minister in 1971, the health minister in 1975, and the business minister in 1986.

Striking are the different attitudes towards “Europe” that separate these two generations. Unlike their elders, Frederiksen’s generation looks at the European Union not as an entity for the spiritual sublimation of the Danish nation-state into a larger society but merely, pragmatically, as a place where Danish businesses can make money. As the pandemic has unfolded, no one in the government in Copenhagen has looked to Brussels for guidance or sought to coordinate its response with other EU governments.

To the contrary, lawmakers in Copenhagen were consistently ahead of the EU, acting independently and closing the borders without hand-wringing sentimentality. The EU won’t come out of this any less an unquestioned element of the country’s mental furniture. But Danish membership will increasingly be seen as nakedly pragmatic and based on calculated self-interest. The idea of “Europe” as a moral community the way the 1968 generation spoke of it is dead. Indeed, Frederiksen is one of the few leaders from Europe’s left that has spoken out against mass migration and the European Union’s freedom of movement on the grounds of both the deleterious effect on working class jobs and the cultural solidarity of the nation.

Lad os samle Danmark igen (“Let us gather Denmark again”). That was the slogan Frederiksen’s Social Democrats took to the nation at the last election. The pandemic has allowed them to do that on a scale none then could have imagined. But the overwhelming support from the public that the government has met during this crisis reflects a hunger for national consolidation that predated this pandemic. The latter may prove as telling a symptom of the popular ambivalence towards decades of elite-led globalization and European integration as any other of our age.

Matthew Dal Santo writes on the politics of post-liberalism and post-secularism in Russia and Europe from his home in Copenhagen, Denmark. His next book, The Romanovs and the Redemption of Russia, will be published by Princeton University Press in 2020. He tweets at @MatthewDalSant1

Previous : Insect or Bat, Germ Warfare is a Dark Cold War Legacy
Next : In a Bismarck Moment, South Korea Chooses China Over the West