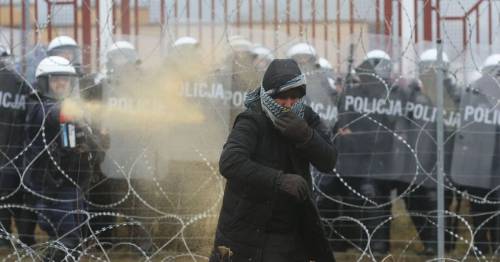 The world was shocked by the deaths of 27 people trying to cross the English Channel from France last week.

Gangs of greedy smugglers were blamed after four flimsy DIY rafts were found at Dungeness beach in Kent.

But the English Channel isn’t the only place seeing record number of migrants trying to cross.

All around the world unprecedented numbers of migrants and asylum seekers are attempting often treacherous journeys to flee danger or poverty and find a better life in a safer country.

Tragically many don’t make it. Just this year at least 4,266 people have died or disappeared on migratory routes worldwide.

Here we look at some of the main crisis points.

Thousands of migrants are believed to still be stranded in Belarus after their presence on the border caused clashes and political tensions last month.

For months Belarusian president Alexander Lukashenko has been accused of using illegal immigrants as a tool to punish the European Union for imposing sanctions on his regime.

In July, the country loosened its restrictions on visas and increased flights from the Middle East, allowing thousands of would-be migrants to arrive from Iraq, Syria and other countries.

Security forces are accused of funnelling the migrants to the borders with EU countries Poland, Lithuania and Latvia, and even giving them wire cutters to breach the fences. The migrants were forced back by guards using water cannons and tear gas.

Humanitarian agencies say as many as 13 migrants have died at the border, where many suffered in a cold, damp forest with little food or water and in freezing temperatures.

Belarus now seems to be trying to defuse the situation, evacuating the makeshift camp and flying more than 400 Iraqis back home aboard a repatriation flight. But thousands more, still intent on reaching Europe, are staying in a temporary shelter.

The fall of Afghanistan to the Taliban is already resulting in a surge in Afghan migrants attempting to cross into Europe from Turkey.

The border was on the frontline of the migrant crisis in 2015 when more than a million people fleeing war in Syria and other Middle Eastern countries crossed from Turkey into the EU.

Turkey signed a deal with the EU to reduce the flow of migrants in return for billions of euros in financial aid. But last year the agreement broke down after Turkey said was no longer able to hold refugees, and in response Greece deployed its armed forces and used tear gas to stop the migrants from crossing the border.

In August Greece completed a 25-mile wall on its border with Turkey, so now most refugees attempt to enter the country by boat over the Aegean Sea.

According to the UN refugee agency UNHCR, over 2,500 migrants arrived in the Greek islands this year, compared with 9,700 in 2020. Over 200 people died or are missing in migrant boats that sank last year.

Migrants are rescued before boarding a ship belonging to SOS Mediterranee
(

The crossing from North Africa to Italy over the central Mediterranean is the world’s deadliest migration route.

At least 22,930 migrants and asylum seekers have died since 2014 in attempts to reach Europe, most of them at sea, according to the International Organisation for Migration (IOM).

Most of the people are fleeing war and poverty in eastern African countries including Somalia, Ethiopia and Eritrea. Their most common entry point is the island of Lampedusa, although others make it to Sicily or the southern tip of the Italian mainland.

On April 22 at least 130 people lost their lives when their rubber boat capsized in stormy seas off the coast of Libya in the largest single loss of life involving migrants this year.

The boat made a distress call amid waves of up to six metres, but the Libyan coastguard reportedly refused to launch a rescue operation. When the volunteer-run SOS Mediterranee ship Ocean Viking arrived at the scene they found no survivors, and at least ten bodies.

The IOM warned in August of a sharp increase in the deaths at sea of migrants trying to reach the Canary Islands, which lie 62 miles west of Morocco.

Over 785 people, including 177 women and 50 children, have reportedly died or disappeared so far this year while heading for the Spanish islands – more than double the previous year.

In the first eight months of 2021, 9,386 people arrived in the Canary Islands by sea, a 140% increase on the same period in 2020. The migrants, most of whom are from Morocco and Senegal, are fleeing war and poverty.

In August only seven people were found alive on a boat carrying 54 after its engine was lost and it drifted for two weeks without food and water.

One of the survivors said: “People were starting to die. Their bodies were thrown into the sea. There were people who looked like they’d gone mad, sometimes they bit each other, they shouted, and they threw themselves into the sea.”

The US has also seen a record influx of migrants at its southern border as economic and security problems in Central American countries worsened during the pandemic.

The number of migrants had been steadily increasing since the start of 2020 but spiked sharply after Joe Biden took office as people hoped the new US president would relax border controls.

In May, the latest month with published data, US Customs and Border Protection (CBP) recorded its highest monthly total in more than 20 years of just over 180,000 migrants.

Mostly from Honduras, Guatemala, El Salvador, Nicaragua and Cuba, they attempt to evade border officials by hiding in cars or travelling undetected across treacherous parts of the US-Mexico border.

US Border Patrol recorded 557 migrant deaths in this fiscal year, more than double last year’s total of 254 and more than any prior year on record. The majority of deaths were caused by heat exposure as migrants lost their way making their way across the Mexican desert, the agency said.