Fighting over Nagorno-Karabakh goes on despite US mediation 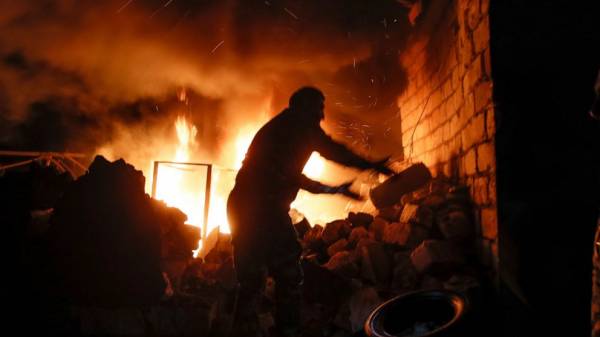 The heavy shelling forced residents of Stepanakert, the regional capital of Nagorno-Karabakh, into shelters, as emergency teams rushed to extinguish fires.

Nagorno-Karabakh authorities said other towns in the region were also targeted by Azerbaijani artillery fire. There was no immediate information about casualties.

Officials in Azerbaijan claimed that the town of Terter and areas in the Gubadli region came under Armenian shelling early Saturday, killing a teenager. They said that another 13-year-old boy died Saturday of wounds he received in an earlier shelling of Ganja, Azerbaijan’s second-largest city.

Nagorno-Karabakh lies within Azerbaijan but has been under the control of ethnic Armenian forces backed by Armenia since a war there ended in 1994. The current fighting that started Sept. 27 marks the worst escalation in the conflict since the war’s end.

After two failed attempts by Russia to broker a truce, the U.S. waded onto the scene on Friday, with Secretary of State Mike Pompeo hosting the Armenian and Azerbaijan foreign ministers for separate talks.

“Both must implement a ceasefire and return to substantive negotiations,” Pompeo said in a tweet after the negotiations.

“Just now a bomb exploded in my garden,” Georgiy, a resident of Stepanakert who only gave his first name amid the war jitters, said after the overnight attack. “If this is the so-called cease-fire, let the whole world see this cease-fire.”

Georgiy, who was born in Stepanakert, said he would stay home despite the fighting.

“This is my motherland, I’m not going to leave it,” he said. “All the people will stand until the last.”

According to Nagorno-Karabakh officials, 927 of their troops have been killed, and 37 civilians also have died. Azerbaijan hasn’t disclosed its military losses, but said that over 60 civilians were killed and about 300 were wounded.

Russian President Vladimir Putin said Thursday that according to Moscow’s information, the death toll from the fighting was significantly higher than officially reported by the warring parties, nearing 5,000.

Russia, the United States and France have co-chaired the so-called Minsk Group set up by the Organization for Security and Cooperation in Europe to mediate in the conflict, but they haven’t scored any progress after nearly three decades.

Azerbaijani President Ilham Aliyev has said that to end hostilities Armenian forces must withdraw from Nagorno-Karabakh. He has insisted that Azerbaijan has the right to reclaim its territory by force since international mediators have failed.

Turkey has thrown its weight behind Azerbaijan, vowing to support its longtime ally “on the battlefield or the negotiating table.” It has trained Azerbaijani military and provided it with strike drones and long-range rocket systems that gave Azerbaijan a strong edge on the battlefield.

Armenian officials say Turkey is directly involved in the conflict and is sending Syrian mercenaries to fight on Azerbaijan’s side. Turkey has denied deploying combatants to the region, but a Syrian war monitor and Syria-based opposition activists have confirmed that Turkey has sent hundreds of Syrian opposition fighters to fight in Nagorno-Karabakh.

Avet Demourian in Yerevan, Armenia, Aida Sultanova in London and Vladimir Isachenkov in Moscow contributed to this report.