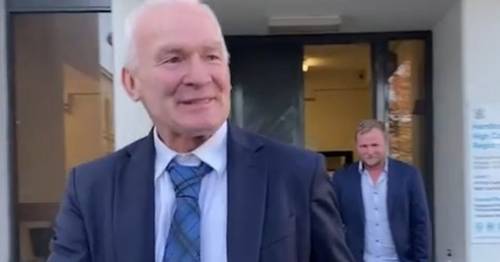 A dad and his son have been found not guilty over an attack that saw the tip of a teenage burglar's finger chopped off after he broke into their home.

William and Shaun Burr argued self defence at their trial in the High Court in Hamilton, New Zealand.

William Burr was also charged with assaulting a female and assaulting with intent to injure.

But they were found not guilty on all charges by a jury and hugged their family as they left court.

They cut off the little finger of the teen intruder

Two intruders raided their home in Piopio, King Country, to steal his car during the early hours of October 1 2020, jurors were told.

The teenager had stolen three other cars from William Burr and the court heard how he had broken his bail conditions to come back with his girlfriend to try and steal a fourth vehicle.

Jurors were told that after being hit with a wine bottle, William Burr found his gun and marched the pair into the kitchen.

Shaun Burr then arrived and the duo 'took revenge' on the robber.

William Burr had "good reason" to believe the boy was dangerous, the court heard

Philip Morgan QC said, in his closing statement, said William Burr had "good reason" to believe the intruder was dangerous.

He said the man’s actions were "reasonable given the circumstances".

The jury, made up of three women and nine men, spent less than an hour deliberating following the six day trial.

They then returned their unanimous verdicts in front of a packed public gallery, made up of the Burr family and their supporters.

Prosecutor Rebecca Mann had argued there were plenty of opportunities for the father and son to get themselves away from two intruders.

The 17-year-old made no sound when they cut off his finger, she said.

But Shaun Burr’s lawyer, Simon Lance, said the teen had a knife, and said he wanted to stab the Burrs.

When they were cleared, there were hugs and tears outside the courtroom as the pair celebrated the not guilty verdicts.