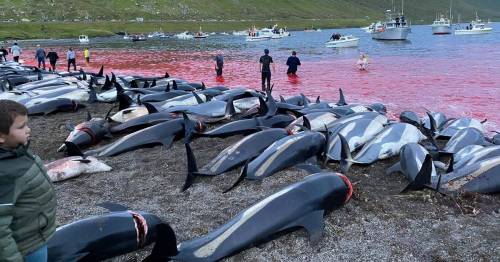 Horrific images from the Faroe Islands’ biggest recorded dolphin massacre show corpses lining the beaches and the sea dyed red with their blood.

Hunters in the remote archipelago are said to have have killed 1,428 of the animals this week; the largest ever recorded death toll from the traditional century-old annual hunt.

Gory images showing the result of the hunt shows dozens and dozens of white-sided dolphins lined up in the shallows of the Islands' beaches, laid in water stained red with their blood with deep gashes visible on their bodies.

The gruesome festival is known as grindadráp or “grind”, which dates back to Viking times.

According to data kept by the Faroe Islands, which are semi-independent and part of the Danish realm, up to 1,000 sea mammals are killed each year during the event.

Up to 1,000 dolphins are typically killed each year during the event
(

As part of the gory tradition, boats drive the Atlantic White Sided Dolphins towards a bay on the island of Skálafjørður. At the shore, men wait to kill the animals in the shallows with hooks, knives and spears.

Faroese are said to be divided on grindadráp, but many urge foreign media and NGOs to respect their traditional island culture. Fishing retains a central place on the island and meat is typically kept for food.

The practise has been condemned by animal rights groups as ‘barbaric’, but locals claim it is an important part of their local tradition.

Some of those who defend the slaughter reportedly are worried that Sunday’s hunt will draw unwanted attention, as it was far larger than previous events and was said to have gone ahead without the usual organisation.

The graphic scene of hundreds of slaughtered dolphins in Skálafjörður
(

Olavur Sjurdarberg, chairman of the Faroese Pilot Whale Hunt Association, expressed his concerns that the mass slaughter would fire up debate on the practice once again.

Sjurdarberg told local broadcaster KVF: “We need to keep in mind that we are not alone on earth. On the contrary, the world has become much smaller today, with everyone walking around with a camera in their pocket.

'This is a fabulous treat for those who want us badly when it comes to pilot whale catching.'

The traditional event is the last remaining form of aboriginal whaling still in existence in Western Europe.

In accordance with Faroese law, pilot whales, bottlenose dolphins, white-beaked dolphins and harbour porpoises can also be hunted, with the meat and blubber from the animals frequently being used for food.

The practice dates back to a time when locals were reliant on whale and dolphin meat to survive. Despite the widespread consumption, a recent study found the meat contains mercury and is not recommended for regular consumption.

Whaling is not regulated by the International Whaling Commission because of disagreements over the body's power to control the cetacean hunts, and instead is governed by Faroese authorities.

Whaling is governed by Faroese authorities
(

An international moratorium on whaling was introduced in 1986, but the International Whaling Commission still allows some ‘subsistence’ whaling. An exception to zero catch limits was made for aboriginal whaling because of its cultural importance.

While Faroese law states the animals must die quickly, without suffering, this is not often the case. In 2015 the law was updated, with hunters now having to attend a course where they learn how to properly slaughter animals with the spinal cord lance.

If this technique is not used, it can take upwards of 20 minutes for animals to die, and whales and dolphins endure the horror of seeing their relatives killed in front of them.

The killings are frequently documented by environmental charity Sea Shepherd, a group which has been operating in the Faroes since the early 1980s.

The activists have been known to take direct action against the grindadráp with their own boats.

The organisation's chief operating officer, Rob Read, said the killing was of a “whole other scale entirely”.

“It is mind-blowingly unprecedented,” he said.

'There is no need for the meat in Faroe Islands nowadays and it shouldn't be happening, never mind in these numbers.”

Earlier this year Sea Shepherd caught on camera another, smaller hunt, with more gory images showing the waters off the islands turning red with the animals’ blood.

The footage shows whalers driving them on the beach to be killed for meat.