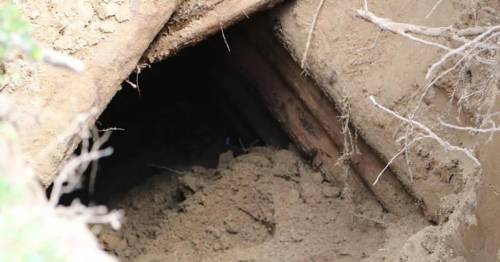 A family has made an incredible discovery while digging in their back garden dating back to the 1860s.

Christy Kallemeier-Keene, who lives in New Madrid in Missouri, US, shared photos on social media of the civil war bunker she found in her garden.

Sharing her shock at the discovery with her Facebook friends, she captioned the photo: "When digging in the yard you find a civil war bunker!"

She added: "You can't make this stuff up!"

The photos show a square whole in the ground partly covered over with dirt and roots. A timber-lined entrance is still just about visible and inside, the bunker is lined with wooden beams.

Commenting on the incredible discovery, one person said: "That is awesome to say the least!! Glad it wasn't accidentally destroyed!!"

"Who would of thought right in your own backyard," said another.

Christy later shared how someone from the State Historical Society of Missouri visited to inspect the bunker.

They had to cover it over for safety reasons.

"We had to cover it back up," Christy continued.

"So a couple of timbers [were taken] for the museum and pictures are all we got."

It is assumed that the bunker was built sometime between the years 1861 and 1865, when there was a civil war in America.

The war errupted over the status of slavery in the US.

Christy said it's difficult to determine if the bunker was ever actually used for the purpose it was built for.

They took a metal detector down into it, but nothing was found.

But Christy is not the only person to make an impressive historical discovery recently.

A UK-based fossil hunter aged just six has unearthed a four-inch tooth from one of the world’s largest prehistoric sharks.

Sammy Shelton spotted the giant canine from a megalodon dating back up to 20 million years while walking with his family on the beach at Bawdsey, Suffolk.

Only a handful of teeth from the 50 to 60ft-long creatures – three times the size of great white sharks – are found in the UK every year.

Previous : Russia warns nuclear weapon use will be justified if there is an ‘existential threat’ – World News
Next : Prince Charles’s moan to Camilla at State Opening of Parliament revealed by lip reader