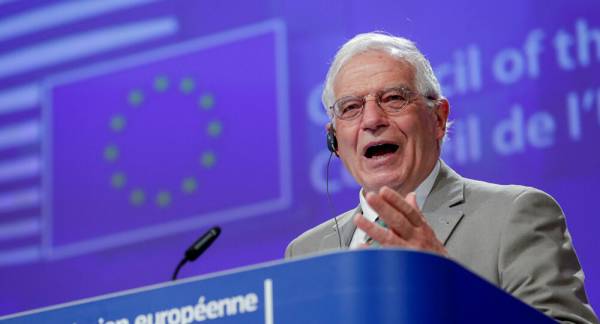 Amid the continuing spread of the COVID-19 pandemic, top European Union diplomat Josep Borrell acknowledged that China had tried to pressure the EU into watering down a coronavirus disinformation report, claiming China’s actions were “normal diplomacy”

The European Union’s chief diplomat, Josep Borrell has claimed that Europe was “a little naive” in its relationship with China but is gradually adopting a more realistic approach, speaking in an interview with France’s Le Journal du Dimanche on Sunday.

The High Representative of the European Union believes that China is to be perceived as not only an economic partner, but as a “systemic rival that seeks to promote an alternative model of governance”.

Borrell who succeeded Italy’s Federica Mogherini to the post, emphasized that while the EU and China advocate multilateralism, this would suggest they are “on the same side,” yet at a time of global crisis, such as the current COVID-19 pandemic, this does not necessarily signify the two perceive global governance in the same way.

©
AFP 2020 / FABRICE COFFRINIThis picture taken on April 24, 2020 shows a sign of the World Health Organization (WHO) in Geneva next to their headquarters, amid the COVID-19 outbreak, caused by the novel coronavirus

The EU foreign affairs chief underscored that China has a “different understanding of the international order.”

In the interview, Borrell added that the global health crisis generated by the coronavirus epidemic had taken the rivalry between Washington and Beijing to a new level, with the two trading accusations and blaming one another for the pandemic.

Borrell also took issue with the US President’s perception of multilateralism.

The European Union’s leading diplomat dismissed US President Donald Trump’s theory that the novel coronavirus had escaped a Chinese laboratory, when questioned on the issue.

Donald Trump has been criticising China for allegedly concealing vital data about the spread of the coronavirus during its initial stage and ordered an investigation into reports that the pandemic had been caused by an accident at the Wuhan Institute of Virology.

Trump has also been lambasting the World Health Organization for reportedly covering up the scope of the infection after it was first reported in China, and in April halted US funding to the WHO.

China has been vehemently rejecting all accusations levelled against it, stressing that it has been transparent while reporting on the coronavirus pandemic.

Borrell urged an independent study of what happened in connection to the origins of the virus, whilst steering clear of the “battlelines” between China and the United States.

When asked if the EU was in favor of an international inquiry into the origins of the virus, Borrell acknowledged that there were plans to request an independent review of lessons learned from the international health response to better prepare for the next epidemic.

The European Union and its member states, he said, have drafted a resolution which will be presented on 18 May to the World Health Assembly (WHA), defining what should be the coordinated international response to the spread of the coronavirus.

The official was also asked to comment on his 30 April statement to the European Parliament in Brussels that China had been trying to assert influence on the EU’s coronavirus disinformation report that was critical of its actions.

The EU diplomat had denied watering down the report, according to the South China Morning Post, dismissing the moves as normal diplomacy, and adding the “pressure” hadn’t been successful.

The report, which first made headlines on 24 April after The New York Times claimed pressure from China had led to it being softened, included information about Beijing’s attempts to limi the COVID-19 spread to Wuhan, the city where the epidemic started.

The Times cited emails from EU diplomats, including one from Lutz Güllner, who was said to have written to his peers:

While the first report said that China had “continued to run a global disinformation campaign to deflect blame for the outbreak of the pandemic”, according to the outlet, the second report’s language was softened, to scrub the words “global disinformation”, while still voicing criticism of China.

Borrell insisted the amended version was part of a typical editing process.

Previous : With quirks and restrictions, many states lift lockdowns
Next : Why Joe Biden’s Alleged Sexual Assault Unlikely to Cost Him 2020 Race