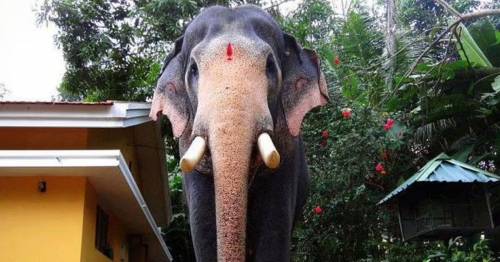 A heartbroken elephant walked over 15 miles to attend its rider’s funeral and say its last goodbyes to him.

The huge animal walked beside its keeper Kunnakkad Damodaran Nair’s son for two hours to visit his body outside his home.

The devastated mammal, called Brahmadathan, can be seen in footage standing alongside mourners before touching the body of its late mahout – the official name for an elephant rider or keeper – as a mark of respect.

In the remarkable video, Brahmadathan was shown walking down a lane to the front yard of the late Mr Nair's house before his body was taken for his last rites. 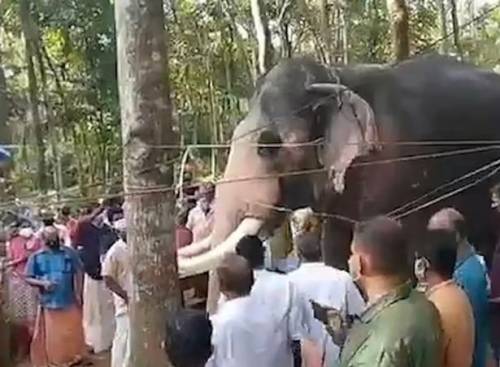 The elephant then stood in front of the verandah and raised its trunk twice
(Image: SWNS)

The elephant then stood in front of the verandah and raised its trunk twice before Mr Nair’s son, Rajesh, came over to pat it on the head.

After a few moments, Brahmadathan retreated, but not before paying one last salute to its mahout with another trunk raise.

The sight moved the people gathered at the house to tears and was shared on Facebook on Thursday by a user who wrote: “This is what happened when elephant Brahmadantan came to pay his respects to his mahout, Omanachettan, who passed away today.”

The video was viewed thousands of times in less than 24 hours and prompted over 24,000 reactions and more than 10,000 comments.

Kunnakkad Damodaran Nair alias Omanchetan, 74, died at his home in Kerala, south India, last week after spending almost six decades as a mahout. He had been suffering from cancer.

Both he and Brahmadathan had spent every day together for the past 25 years and villagers were said to be "envious" of the pair's special bond. 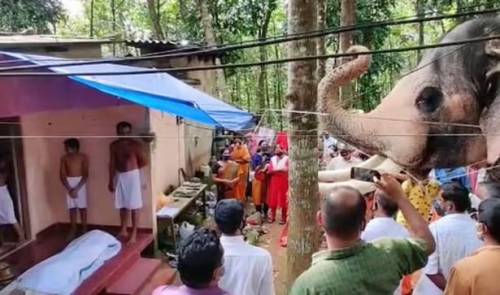 He and Brahmadathan had spent every day together for the past 25 years
(Image: SWNS)

His son Rajesh, 50, said: "When Brahmadathan came to the to the funeral I couldn't bear it.

"His last wish was to see Brahmadathan. Everyone was envious of their bond.

"My father had been a mahout and trainer for nearly six decades and partook in various festivals to pull crowds."

Elephants have a special bond with humans and are famed for visiting the remains of dead family members, stroking their bones or at times rocking back and forth in what resembles a vigil.

Previous : Blinken anticipates hundreds of sanctions on Iran to remain in place
Next : Court orders Michael Gove’s office to hand over documents on secretive ‘blacklist’ unit