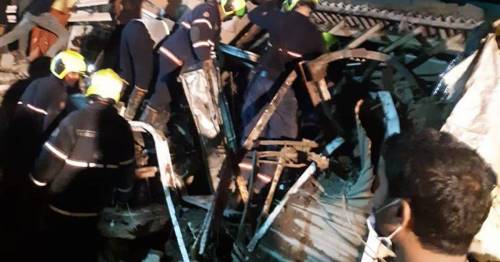 Eleven people are dead, including eight children, after a building collapsed in Mumbai on the first day of heavy rains in the city.

Officials were reported to have blamed the tragedy on the weather which lashed the city yesterday.

The disaster happened on Wednesday night and saw one residential building fall on to another building, local officials said.

It took place in a northern suburb of India's largest city and officials have warned that yet more people could still be trapped inside the debris.

Along with the nearly a dozen deaths 15 people were said to have been injured and were taken to nearby hospitals.

Local media showed pictures of rescue workers pulling out debris in a narrow lane as relatives and onlookers watched.

Reportedly, residents from three nearby buildings were also evacuated as the structures were said to be not in good condition.

News agency ANI reported Vishal Thakur, Deputy Commissioner of police, as saying: "15 people including women and children have been rescued and are shifted to the hospital.

"There is a possibility of more people stuck under the debris. Teams are present here to rescue people."

Hindustan Times reports that Maharashtra minister Aslam Shaikh, who went to the disaster site, said the collapse happened due to rain.

Incidents of building collapses are more common in India's financial capital of Mumbai during the monsoon.

Wednesday was the first day of heavy rains which lashed the city and its suburbs, leading to floods on roads and railways.

Previous : Bo Burnham and the Possibilities of the Cinematic Selfie
Next : Two Australian states on COVID-19 alert after infected woman’s interstate travel