Drones deployed during marches were not to spy on protesters: Authorities 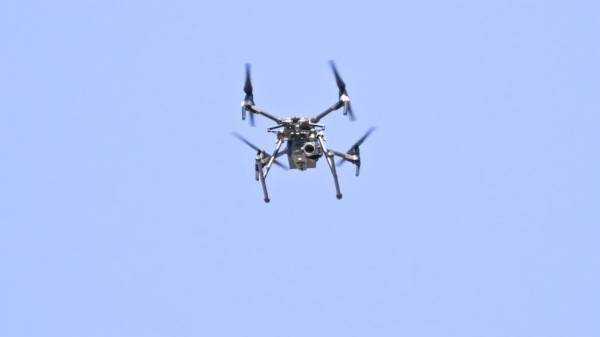 The acting U.S. Customs and Border Protection commissioner told ABC News that CBP drones that were used to monitor protests from high in the sky were not put in place to surveil protesters.

“What I would categorize that as just a false narrative,” Acting CBP Commissioner Mark Morgan told ABC News. “We were not providing any resources to surveil lawful peaceful protesters. That’s not what we were doing,” he continued.

Morgan said CBP was helping more than a dozen cities around the country and “providing assistance to state and locals so they could make sure that their cities and their towns were protected.”

He added that when a driver allegedly ran over a group of law enforcement officers in Buffalo, NY, the CBP “air operation” was able to help track the vehicle and assist local law enforcement in arresting the driver.

“We weren’t taking any information on law abiding protesters, but we were absolutely there to ensure that the safety of folks there as well as to enforce, and make sure law and order remain,” he said.

Over the weekend, House Democrats sent a letter to Department of Homeland Security Acting Secretary Chad Wolf about alleged drones over Minneapolis and other cities.

Morgan said that the support that CBP provided to cites is “no different” than what they have done throughout the agency’s history.

He also told ABC News that there is no systematic racism in the law enforcement profession. “That’s just not true,” Morgan said, echoing the attorney general and acting DHS secretary over the weekend.

“What is systematic is that men and women in this profession, are law enforcement professionals who get up every single day. They put a badge on their chest, and they go answer the call, to help people that often can’t help themselves,” he continued. “And they run towards danger, they don’t run away from it, and they’re not asking, when they’re running towards a danger to help somebody, they’re not asking what their race, creed, color or sexual orientation is, all they see is a human being in need of assistance, and they’re running to it.”

Morgan said he will work with lawmakers on police reform in the country and has already “offered assistance and dialogue” to some members.

“We need to keep talking, we need to keep engaging, but we need to do so in an honest way and we need to recognize that not all cops are bad,” he said before adding that “of course” there are bad cops, but the overwhelming majority are good.

The acting CBP commissioner said that although it is too early to tell who exactly is stirring up the violent protests, there are few things that are “very clear.”

The first is that there are people with “antifa-like tactics,” he said, citing the fact that there have been a “cache of bricks that have been dropped off in multiple cities in strategic locations.”

“There is information out there where people are organizing and influencing and trying to direct people to smash businesses,” Morgan said. He added that these people have an “ideological agenda,” and that some are specifically targeting police officers.

The second group he categorized as “common thugs.”

The final group of people, Morgan said are “people that are legitimately lawfully and tried to peacefully protest.”

He thinks that CBP’s presence around the Washington monument helped stop it from being “defaced with graffiti or targeted.”

“We call that a show of force as a deterrent to keep those agitators, those groups that have an agenda to either burn or loot buildings or attack law enforcement, because we kept law and order in check,” he said.

Morgan said the show of force “supported and enabled the lawful peaceful protests.”