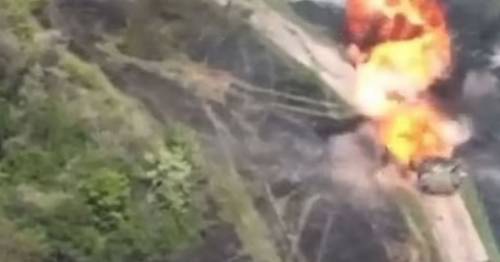 A video shared by Ukraine shows the catastrophic moment one of Russia ’s flagship tanks is obliterated.

The brief clip, shared on its defence channels, shows the fearsome T-90M moments before it explodes in a fireball in the east of the nation.

Pieces of debris are sent flying as a result of the rocket strike by Ukrainian soldiers.

It was reportedly filmed during the fighting for Stary Saltiv, north of Kharkiv.

The T-90M tank is believed to be Vladimir Putin’s most advanced weapon and was brought into his army two years ago.

His arsenal is believed to include around 100 of the tanks.

Along with the video, the tweet read: “Near Stary Saltiv, Kharkiv Territorial Defence fighters eliminated another new T-90M "Breakthrough" tank.

“The pride of the Russian tank industry was destroyed by the Swedish hand-held anti-tank grenade launcher Carl Gustaf.

“We thank the Swedish people and the King for their help.”

Last month it was reported Sweden has so far provided the under siege nation with around 10,000 anti-tank weapons, as well as other weaponry including body shields, helmets and rations.

Prime Minister Magdalena Andersson said: “Europe, and even Sweden, now finds itself in an exceptional situation, which means that exceptional decisions must be taken.

The tank was seen moments before the explosion near Kharkiv

“It is not Swedish practice to send military equipment to conflict zones.

“The last time Sweden did so to any great extent was when the Soviet Union attacked Finland in 1939.

“While we focus on the acute humanitarian efforts in Ukraine, we also need to manage the long-term economic impact of the war.

“The rest of the world must support early recovery and, in the long-term, reconstruction.”

One of the fearsome T-90Ms destroyed near the village of Staryi Saltiv, near Kharkiv
(

Despite its weaponry, last month an expert claimed they have serious design flaws which have been targeted by Ukraine’s forces.

Sam Bendett, an adviser with the Russian Studies Program at the Center for a New American Security, told CNN : "What we are witnessing with Russian tanks is a design flaw.

“Any successful hit…quickly ignites the ammo causing a massive explosion, and the turret is literally blown off."

The design has its perks – for example, allowing for extra space inside, and giving tanks a lower profile, ensuring they're harder to hit.

Subsequent models including the T-90 and T-80 had the same vulnerability due to the missile loading system.

But Western militaries have learned from the flaw and their tanks now have compartmentalised ammunition.