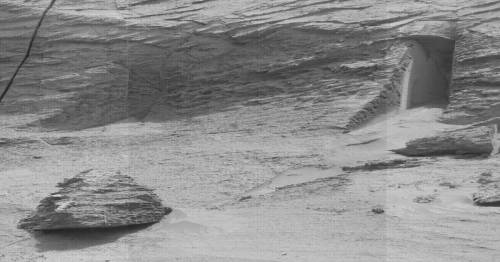 A cleanly cut "doorway" that heads into a rockface has been spotted on a newly released picture of Mars by NASA taken by their Curiosity rover.

Debate has been rife amongst space enthusiasts and conspiracy theorists about what could be inside the doorway or whether it is just a natural feature in the rock.

Snapped by the explorer's Mast Camera or "Mastcam" on Sol 3466 (7 May), the grainy image appears to show an opening with filed away rock, reported the Daily Record.

There has been no official explanation from the American space agency about the doorway but that hasn't stopped debate online about just what exactly it shows.

One social media user described the scene as "a formation on Mars which appears to be a portal and a wall nearby that looks artificial."

Conspiracy theorists believe that it is clearly a cleanly carved doorway
(

Another concluded: "Swear to God, there's at least five Martians camouflaged in there."

However, others were more 'down to earth' with one Reddit user stating: "It's obviously not a little door, it's just a flat piece of broken rock."

The finding comes as the US Congress is to hold an open hearing next Tuesday about UFOs for the first time in over 50 years.

The US House Intelligence Committee's Counterterrorism, Counterintelligence, and Counterproliferation Subcommittee will tackle the subject.

The image was taken by by NASA's Curiosity rover
(

Panel chair, Rep. Andre Carson, stated: "The American people expect and deserve their leaders in government and intelligence to seriously evaluate and respond to any potential national security risks – especially those we do not fully understand."

The US government released a report on documented cases of so-called 'Unidentified Aerial Phenomena' (UAP) in the summer of 2021.

In it, the Director of National Intelligence examined 144 cases of UFOs, but could explain only one.

Meanwhile, scientists on Thursday provided the first look at a supermassive black hole that devours any matter within its huge gravitational pull and is at the centre of our Milky Way galaxy.

The black hole – called Sagittarius A*, or Sgr A* – is the second one ever to be imaged.

The feat was accomplished by the same Event Horizon Telescope (EHT) international collaboration that in 2019 unveiled the first photo of a black hole – that one residing at the heart of a different galaxy.

University of Arizona astronomer Feryal Azel, at a news conference in Washington, hailed "the first direct image of the gentle giant in the centre of our galaxy," showing a glowing ring of red, yellow and white surrounding a darker centre.

Sagittarius A* (pronounced Sagittarius "A" star) possesses four million times the mass of our sun and is located about 26,000 light-years – the distance light travels in a year, 5.9 trillion miles – from Earth.

Previous : Boston Bruins force Game 7 against Carolina Hurricanes, are confident they can win it on road
Next : Expert explains why women marry murderers as Levi Bellfield demands jail wedding