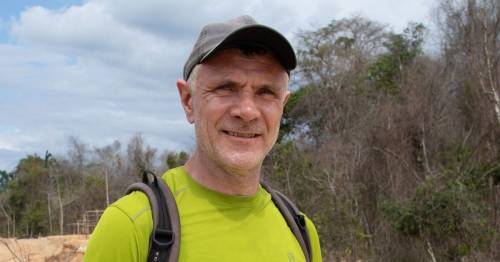 An autopsy used dental records to match the discovery to the 57-year-old freelance writer.

He disappeared along with Indigenous expert Bruno Pereira, 41, earlier this month.

In recent days, police were led to the site where the pair were allegedly shot and dismembered.

However, detectives have refused to give any further details about the suspect or how he allegedly killed the pair.

On Friday, police said the two men acted alone and did not carry out the murders on the orders of any from above.

Phillips and Pereira vanished on June 5 during a trip in the Javari Valley in the far western part of Amazonas state.

They were last seen in the Sao Rafael community, a two-hour boat ride from Atalaia do Norte city.

They had been accompanying an indigenous patrol in the Itaquaí river organised to prevent invasions from illegal fishermen and hunters on the Javari Valley Indigenous Land.

The grim discovery of the bodies brought to an end to a 10-day search in the country's far west that involved the army, navy and police.

Detective Eduardo Fontes told journalists the "first suspect" – Amarildo – had "recounted in detail the crime that was committed and indicated the place where he buried the bodies".

His brother denies any involvement.

Phillips and Pereira disappeared while conducting research for a book project on conservation efforts in the region.

The work was titled How to Save the Amazon.

The authorities have described the area as "complicated" and "dangerous," and known to harbour illegal miners, loggers, and international drug dealers.

The pair had reportedly received death threats just days prior to their disappearance.

Blood was previously found on Pelado's boat, which is currently being analysed.

Now the bodies have been identified, they "will be returned to the families of the two", said Brazil's Justice Minister Anderson Torres.

Speaking at a news conference in the Amazon city of Manaus, he continued: "We found the bodies three kilometres (nearly two miles) into the woods."

Mr Torres said officers travelled about one hour and 40 minutes by boat on a river and 25 more into the woods to reach the burial spot.

"We would have no way of getting to that spot quickly without the confession," Mr Torres said about the recovery of their bodies on Wednesday.

The area deep in the rainforest where they went missing has recently faced violent conflicts between fishermen, poachers and government agents.

Mr Phillips was an esteemed freelance foreign correspondent and regular contributor to The Guardian, and Mr Pereira was a respected former Brazilian Indigenous rights official.

In a statement, Mr Phillips' wife Alessandra Sampaio said: "This tragic outcome puts an end to the anguish of not knowing Dom and Bruno's whereabouts.

"Now we can bring them home and say goodbye with love."

Previous : Elderly Brit arrested in Greece ‘for secretly photographing children’ on tourist beach – World News
Next : Woman ‘raped by three men’ who followed her late at night as she walked through green