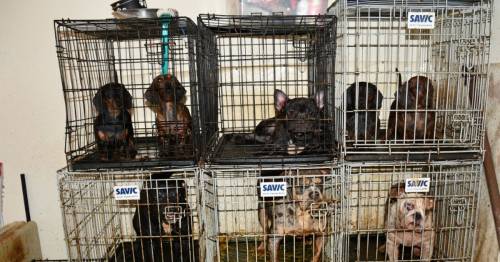 Dozens of dogs and puppies were among animals rescued from "inhumane conditions" in two apartments, police say.

A massive haul of animals was found during a raid on two squalid flats in Citywest, Dublin, Ireland, on Wednesday afternoon.

Cats, parrots, tarantulas, a snake and even a millipede were also found during the operation.

The animals were being kept in "inhumane conditions", a Gardai spokesperson told Dublin Live.

Police shared images of the dirty scene, where dogs were stuffed into stacked, cramped cages.

One picture shows five small pooches, packed into a single enclosure with another container holding two pups placed on top.

The animals are now being cared for by DSPCA vets

Gardai teamed up with the Dublin Society for Prevention of Cruelty to Animals on the multi-agency raid.

The animals were rescued from the scene and are now being cared for by vets linked to the DSPCA.

Arrests are yet to be made in the case, and investigations are ongoing, the Gardai said.

The full statement read: "As part of a multiagency operation, Tallaght Gardaí with the assistance of the Dog Warden from South Dublin County Council and the DSPCA, have seized a variety of animals following searches of two apartments in Citywest, Co. Dublin, 1st December 2021.

"Over the course of the search Gardaí recovered 38 dogs and puppies and other animals which were being kept in inhumane living conditions.

"Other animals recovered from the premises included cats, parrots, tarantulas, a snake, a scorpion and a millipede.

"The animals were removed from the premises and have been taken by the DSPCA for veterinary treatment.

"No arrests have been made at this time. This investigation is ongoing."

Previous : ‘I’m Muslim but I refuse to be bullied into not putting up my Christmas tree’ – Anila Baig
Next : F1 champ Sebastian Vettel hosts karting race for women ahead of Saudi Grand Prix – World News