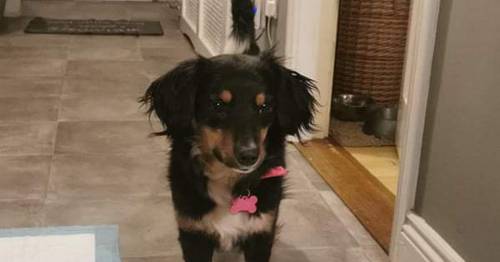 A dog has been pictured looking fit and well after having suffered in "horrendous" conditions along with 55 other animals where some were caked in faeces, "almost feral" and even blind due to possible inbreeding.

The puppy, Lacey, was found at a property in Lismore, County Waterford, Ireland in October, 2020, alongside the other dogs, who were living in a house and sheds.

Animal welfare officers said that the animals had ben deprived of water, natural light and many were sick. There was a lack of ventilation and with a build up of faeces meant there was an “overpowering stench of ammonia”.

The health issues included untreated skin conditions, malnourishment, bite wounds and matted coats which were caked in faeces and urine.

A number of the dogs were also blind which was believed to be a result of inbreeding, as well as being terrified of human contact and “almost feral” down to having little socialisation and care.

ISPCA inspector Alice Lacey was on the scene, describing it as “extremely challenging and distressing”.

She said: "The smell was indescribable and the living conditions were horrendous, the majority of dogs were not used to being outside in fresh air, and shuddered at any sign of human touch."

Sadly, due to the severity of their physical and psychological states, a significant number of the dogs were euthanised to end their suffering.

But a large majority were successfully rehabilitated after spending considerable lengths of time in ISPCA care, making full recoveries and going on to find loving new homes.

One dog in particular, named Lacey, looks completely different after being showered with love and care, has been re-homed to a loving owner.

On 13 May, brothers Patrick and Michael O’Brien of Monaman, Lismore, Co. Waterford pleaded guilty to offences under the Animal Health and Welfare Act 2013.

The dogs were left without water and some were sick
(

They received four-month custodial sentences from Judge Brian O’Shea as well as both brothers being disqualified from owning any dogs for life and were ordered to pay costs of €1,330 and €1,979 in veterinary fees.

On passing sentence Judge O’Shea said that the case was “at the upper end of the range of gravity” and “undoubtedly the worst cases of animal abuse” that he had seen.

He said: “It never [ceases] to amaze me how bad these cases can get. You see one bad case and think it can’t get worse, but it does.”

Previous : Mum’s piercing scream of terror as she wakes up to find ‘machete-wielding man’ in room
Next : Police in urgent manhunt for cycling sex beast preying on lone women as 22 attacked