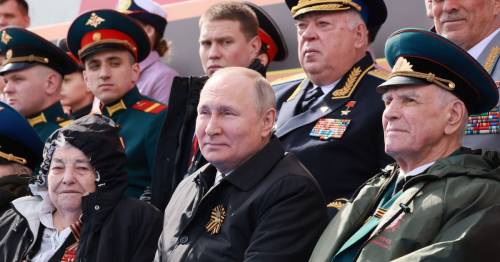 Vladimir Putin looked like a “little old man feeling the cold” as he sat beneath a blanket during Russia's Victory Day parade, a body language expert has said.

On Monday millions of people hit the street across Russia to celebrate the nationalistic holiday, which is designed to mark the Nazi German government's surrender at the end of WWII.

The 57th iteration of the event was closely watched yesterday, with many expecting the Russian dictator to indicate a new strategy in his struggling invasion of Ukraine, the Daily Star reported.

Putin did not deliver on that front, instead reiterating his well worn line that the expansion of Nato had forced his forces to invade Ukraine.

Adrianne Carter, who is known to fans as ‘The Face Whisperer', was watching the military despot closely as a great parade of military hardware was rolled out in front of him.

The body language expert said that Putin seemed to have lost his former strength.

“His posture in this morning's clip is upright and determined…but in the blanket clip, it's a little old man feeling the cold," she said.

Adrianne pointed out that Putin’s shoulders are “not as square and back as they normally are”.

“I'd say it's a tired and deflated posture like an old man with no fight in him,” she added.

“The blanket incident is typical of something you'd see in an old people's home.”

Putin’s speech was not as dramatic as experts had predicted, with no sense that he intended to escalate the conflict and a seemingly trying to push the focus of the campaign onto the comparatively small Donbas region.

After talking about the sacrifices the Soviet people had made during World War Two, Putin tried to justify the war on Ukraine with reference to Nato.

The despot was tucked beneath a blanket
(

He also claimed the West had been "preparing for the invasion of our land, including Crimea".

Assessing the lacklustre speech, military expert Lord Dannatt said Putin looked "puffy" and did not appear to be "moving freely".

"He doesn't seem to be moving as freely and as easily as one has seen him do to in the past.

"I think we've all commented that, actually, he looked pretty puffy around the face.

"I don't know how well or how unwell he is, there's people circulating rumours he's got cancer of some sort. I don't know."

Foreign correspondent John Sweeney, who is currently reporting from inside Ukraine, said that the signs of weakness could lead to a challenge from inside the Kremlin: "No declaration of big war; no call-up; no General Gerasimov,” he tweeted.

“Listen: you can hear the knives being sharpened."

Previous : State Opening of Parliament: What happens to the Crown Jewels after they’ve been used?
Next : The Ontario party leaders’ political baggage is about to be front and centre on debate stage