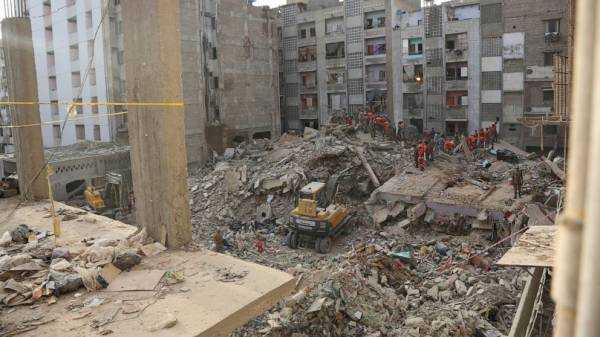 KARACHI, Pakistan —
Pakistani rescuers recovered nine more bodies from beneath the rubble of a building that collapsed earlier this week in the southern port city of Karachi, bringing the death toll to 22, officials said Wednesday. There are fears there may be more bodies.

The building collapsed on Sunday and it was unclear how many people were inside at the time. It had 40 apartments and most of them were empty because it was recently ordered vacated after it was declared unsafe in March, following cracks that had emerged on the roofs and walls.

Rescue workers used heavy machinery and were still removing the rubble, searching for more victims, according to police and the Edhi Foundation, which owns and runs Pakistan’s largest private ambulance service. The earlier reported death toll had stood at 13.

Altaf Hussain, a senior police official, said the building collapsed after some of its residents went back inside to try and retrieve some of their belongings.

Building collapses are common in Pakistan as many are poorly constructed with cheap building materials and safety guidelines are ignored to cut costs.

Also in Karachi, a multistory building that was undergoing additional constructions and expansion, collapsed in March, killing at least 11 people, including women and children.