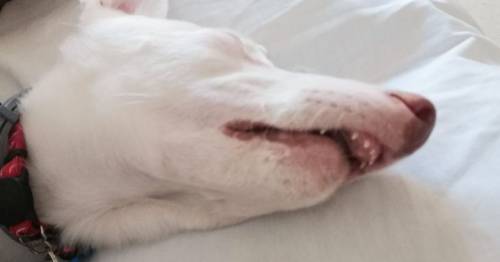 An adorable dog with a "shark-like" jaw has finally found a forever home after being rejected for years.

Olaf, an eight-month-old pooch, was born with his lower jaw shorter than the upper part – which makes his jaw look similar to that of a shark.

The puppy, who is deaf, was abandoned at a shelter because of his deformity.

But now, after several rejections, Olaf, whose breed is not known, has been adopted by Kasia Rapacz.

Kasia, a food and beverage professional from Malaga, Spain, described Olaf as "the sweetest puppy" she has ever seen.

She said she instantly fell in love with the puppy – and decided to adopt him.

Olaf earned the nickname 'dog shark' because of his peculiar jaws
(

The new dog owner explained: "Olaf's adoption description said about his 'defect' and that nobody was interested in him. But I was. He was the sweetest little puppy I've ever seen.

"The gorgeous dog with pristine white fur and bright blue eyes has become an instant celebrity on Instagram where is often called dog with a 'shark jaws.'

"His bottom jaw is way shorter than the upper one which makes him look like a shark.

He faced many rejections due to his jaw deformity
(

"When I saw the post about him on a page I follow, I instantly fell in love with him.

"He looked very happy and friendly and had huge ears. I found it so cute and started to ask about him.

"He definitely looks like a little baby shark. The difference is shark teeth are made to be this way, in Olaf's case it's a malfunction."

Olaf was born with a rare physical deformity
(

Olaf has trouble eating and chewing because the bottom and upper jaw are different, overall he lives a happy life.

Kasia said: "He struggles a little bit especially with eating and picking up something from the floor."

Olaf, whose social media account name is inspired by the famous dinosaur character Finofaurio, attracts people with his unique features and beautiful eyes.

She said: "They don't realise straight away he has a problem with his jaw. They find it curious and cute. Once they meet him, they want to know more about him.

"His blue eyes and white hair make him look very different. Everyone asks if he is albino, and he is not. But he is special."