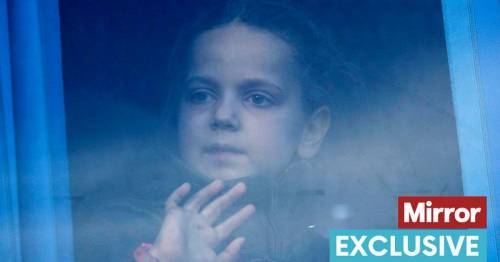 A dazed, war-weary little girl peers out of the window of a bus taking her away from a nightmare.

Away from the underground hell of the besieged Mariupol steel plant where thousands of Ukrainian troops and civilians have been trapped for weeks.

Away from the relentless Russian shelling and into the safety of temporary accommodation in the seaside village of Bezimenne 20 miles away.

She was one of dozens evacuated on Friday and handed over to representatives of the United Nations and the International Committee of the Red Cross.

Her escape comes as Ukraine continues its bid to push back the Russian invaders in the eastern Donetsk region where shattered Mariupol lies under siege.

Around 2,000 troops and 200 civilians, including children, are still holed up in the depths of the Azovstal steelworks, stopping Russia seizing the city and establishing a vital land corridor between the east and Crimea.

Ukrainian officials said Moscow was planning one in the scorched city to coincide with tomorrow’s annual Victory Day parade in Moscow, marking the Soviet Union’s part in the defeat of Hitler in 1945.

And Ukraine is expecting the Russians to celebrate with an increase in attacks. Reports say surviving Mariupol civilians are being forced to clear the bodies of dead neighbours before the “military show” to get food, water and medicine.

Ukraine’s first deputy interior minister Yevhen Yenin said Russia was “preparing to dance over bones in Mariupol” to back the Kremlin state media lie that “peaceful life is being established”.

The reported evacuation from the steelworks
(

The ruins of the city’s bombed theatre, where 600 people died, were also being cleaned up in preparation for the parade.

Mariupol mayoral advisor Petro Andryushchenko said: “These men are told that they will be dressed in Ukrainian uniforms and involved in the so-called parade of prisoners in Mariupol because there are not enough real prisoners.”

Meanwhile Russia faced fresh claims of war crimes yesterday amid reports 500 civilians were being held in torture chambers in Kherson in the occupied south.

It came as defence forces said they had recaptured five villages around Kharkiv in the north east, raising hopes of driving back Russia.

A US think tank said Ukraine’s military may be able to push Russian forces “out of artillery range of Kharkiv providing an opportunity to build a successful, counter-offensive”.

And now Britain is keeping up the flow of weapons Ukrainian leader Volodymyr Zelensky needs to maintain the momentum.”

Boris Johnson said: “The UK was the first country to send arms to help the Ukrainians defend themselves. We will stand by that endeavour.”

The steel plant has been subject to intense Russian attacks
(

Image:
Interior Ministry of the Donetsk)

And Chancellor Rishi Sunak, who agreed to the package, added: “We are unwavering in our support – and this extra £1.3billion will ensure we continue to provide the military and operational support they need to defend themselves against Putin.”

Previous : Brits have £4.5billion of unclaimed cash in lost accounts – make sure you claim
Next : ‘Our stoic Queen has always been there for the country in good and bad times’