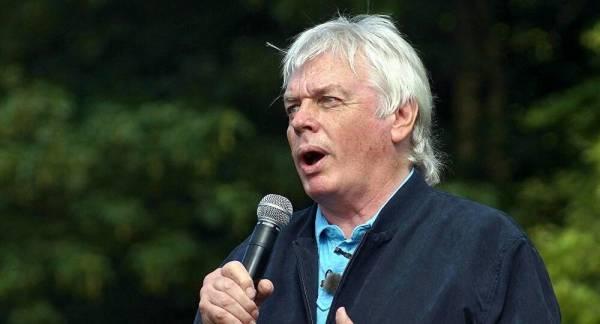 David Icke is no stranger to controversy, and has in the past, among other things, claimed that the world in governed by a secret cabal of extraterrestrial reptiles and that the British Royal Family are lizards.

Facebook has removed the official page of renowned conspiracy theorist David Icke after he made a controversial post about the origins of COVID-19.

Mr Icke had reportedly shared a number videos in which he made claims that the Coronavirus pandemic is linked to 5G networks, while in another he said that the disease had been spread by a Jewish group.

The social media giant said that it had removed Mr Icke from its website for “repeatedly violating our policies on harmful information.”

Following his removal from Facebook, Mr Icke then stormed to Twitter to slam the company as “fascist” for deleting his page. Furthermore, Mr Icke shared a picture of Facebook CEO, Mark Zuckerberg, with the caption, “The little boy gofer for global tyranny.”

The Centre for Countering Digital Hate said in an open letter calling for Mr Icke’s banning from social media that his conspiracies about Coronavirus had been viewed more than 30 million times.

Its chief executive, Imran Ahmed, has been quoted as saying that the kind of information shared by Mr Icke “puts all of our lives at risk by encouraging the public not to comply with clinical guidance.”

Hope Not Hate, a UK-based campaign group, said that it, “welcome news that Facebook have removed David Icke’s page.”

They went on to add that, “he [Mr Icke] has promoted dangerous conspiracy theories including the idea that COVID-19 is a hoax.”

Mr Ickle has also been accused on multiple occasions of using his large social media platform to spread antisemitism.

British broadcaster Rachel Riley, herself a campaigner against antisemitism, welcomed Facebook’s decision, saying, “the hate preacher was banned from Australia. Big arenas have rejected him, yet social media orgs allow him a megaphone (& pocket the profits). Facebook have finally deleted him today!!”

Twitter has responded to criticism that it has not taken the same steps as Facebook by removing Mr Icke’s profile, saying that “prioritising the removal of COVID-19 content when it has a call to action that could potentially cause harm.”

Twitter has been widely quoted as saying in response that it is, “prioritising the removal of COVID-19 content when it has a call to action that could potentially cause harm.”

“As we’ve said previously, we will not take enforcement action on every tweet that contains incomplete or disputed information about COVID-19. Since introducing these policies on 18 March, we’ve removed more than 2,200 tweets. As we’ve doubled down on tech, our automated systems have challenged more than 3.4 million accounts which were targeting discussions around COVID-19 with spammy or manipulative behaviours,” a Twitter spokesperson added.

The 5G theory alleges, among other things, that Coronavirus has been caused by frequencies used for the new wireless technology which impair the human immune system. The theory has spread like wildfire across social media, with many arguing that it is in fact true. As a result, across the UK alone, there have been attacks on around 60 5G masts recorded by the authorities, most of which were set on fire.

Previous : Young Indian Boy Booked on Murder Charges for Dragging Police Official on Car Bonnet in Punjab
Next : Spaniards pour out for 1st exercise in 7 weeks of lockdown