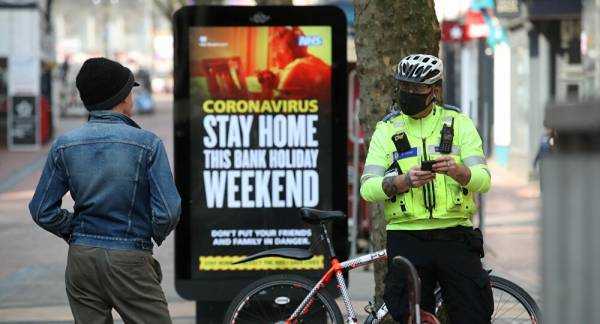 It isn’t known if lockdown restrictions were eventually enforced successfully, or indeed if the bike was returned in one piece. Similarly, it’s unknown precisely when the footage was taken, but it was posted on Twitter 5th May.

In the clip, the lone PCSO approaches a group of over a dozen young men, politely asking them to keep a safe distance apart and return home – in response, the youths mock and verbally abuse the officer, before one wheels the Officer’s bicycle away behind his back.

​“Shall we go home? how you going to get home officer, where’s your bike?!’ another says laughingly – in response, the PCSO repeats he just wants them to go home, and that he’s “doing the right thing here”.

​As the Officer chases after the teenager racing off on his bike, suggestions the thief “slash his tires” abound menacingly.

​“This is the most disgusting thing I’ve seen this guy is doing his job advising you guys to stay home for you and your family’s health. Imagine in Ramadan not being able to have a drop of respect in you. Also, if lockdown doesn’t get released it’s thanks to the boys like this,” said Sumayah Akhtar, the Twitter user who seemingly posted the footage originally.

​Many others echoed Akhtar’s condemnations, with one individual noting Ramadan was “a time to ask for forgiveness and to seek knowledge, not to be harassing people”.