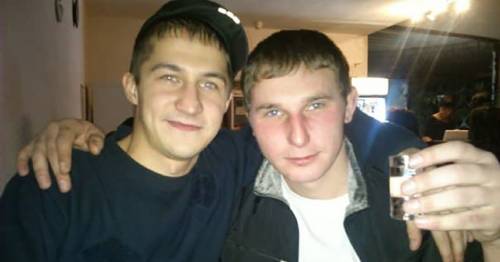 A distraught father who attacked his best friend when he discovered the man had sexually abused his daughter, then six, is not to be charged with murder.

Vyacheslav (Slava) Matrosov, 34, was suspected of stabbing Oleg Sviridov, 32, to death in a forest.

He was alleged to have killed him after making the sex offender dig his own grave.

Sviridov was found dead after Matrosov found sickening and graphic footage on his friend’s mobile, which showed Sviridov forcing his daughter to perform a sex act on him.

Matrosov originally faced a murder investigation for his suspected part in Sviridov’s death.

But now he has been told this has been dropped, say sources close to the case.

In a landmark decision, he will now face prosecution for inciting Sviridov to commit suicide, which carries a lesser sentence than murder.

There was a wave of public support for Matrovov in the Samara region of Russia after he was linked to the killing of suspected paedophile Sviridov.

Locals in the village of Pribrezhny raised money for his initial legal fees.

A petition signed by 2,500 people demanded that he should be fully acquitted.

They supported him for “saving our children by ridding us of a child sex attacker”.

Prominent TV journalist and former Russian presidential candidate Ksenia Sobchak told her followers: “All parents are standing up for the paedophile’s killer.”

The explicit sex abuse footage on Sviridov’s phone had been filmed when the girl was six.

Vyacheslav Matrosov, 34, with his eight-year-old daughter
(

Vyacheslav Matrosov pictured with both of his daughters
(

He is now said to be “pleased” that he will not face a charge of deliberately killing Sviridov.

Vyacheslav Matrosov with his wife
(

He is also no longer required to wear an electronic tag as he awaits trial this year.

He will face prosecution for “inciting a person to suicide or attempted suicide by threats or abuse”, which carries a minimum six year sentence – like life for murder – but often also leads to non-custodial punishments.

Source close to the case said that detailed forensic evidence showed that Matrosov had not stabbed Sviridov in a forest where the dead man’s body was found later in a makeshift grave.

Matrosov pictured with his wife Natalya Matrosova and daughters
(

There are claims Sviridov was given an ultimatum to go to the police and confess to sexually abusing the girl, or face the father's wrath.

A relative said Sviridov was seen badly beaten on the day in September he disappeared, more than a week before his body was found in the makeshift grave near Vintai village.

Two other children in the village are feared to have been abused by Sviridov.