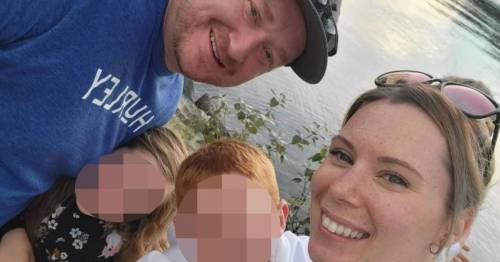 A man who was crushed to death at a McDonald's drive-thru in a freak accident has been described as a perfect dad.

Tony Eyles was killed by his own car after hopping out to pick up a card he had dropped as he lent out of his car to pay for his breakfast.

The 42-year-old's attempt to pick it up ended in tragedy as his vehicle rolled forward and crushed him against the side of the building.

One of his young children heartbreakingly said that knowing their dad for eight years was "not long enough".

Mr Eyles was was pronounced dead at the scene despite emergency crews in Vancouver, Canada, efforts to save him.

The Vancouver Police Department's Collision Investigation Unit and the B.C. Coroners Service are investigating the accident.

Police constable Tania Visintin said: "Usually when we hear about a fatal motor vehicle accident it is usually, typically a crash with another vehicle.

Tony and his wife
(

"The fact that no other vehicle was involved, this seems like a freak accident."

Mr Eyles, who had children aged eight and six, was about to celebrate his ninth wedding anniversary.

Neal Pender paid tribute to his brother-in-law on a Vancouver radio station.

He said: "[Tony] did a fantastic job raising those kids with my sister.

"His son said to me yesterday, ‘I only got to know my dad for eight years, it’s not long enough.’

"It’s impossible to say anything to him about that other than just reminding him about how awesome his dad was."

A staggering £35,000 has already been raised for Mr Eyles’s widow and children on GoFundMe.

Previous : Nigerian economy to grow by up to 3% this year – cenbank governor
Next : Surfer attacked by two huge sharks but paddled to safety with one hand ‘hanging off’ – World News