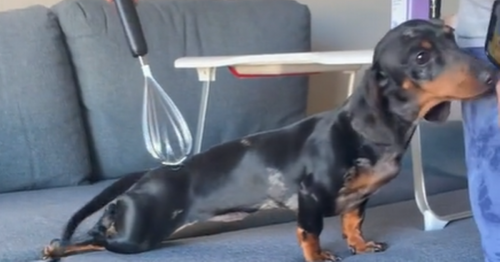 An adorable sausage dog puppy has featured in an amusing recreation of a scene from The Secret Life of Pets.

Daphne the wiener dog has been watching the 2016 film which features the voices of celebrities such as Kevin Hart, Steve Coogan and Jenny Slate.

In a TikTok video, the dachshund is seen recreating a whisk scene from the Universal Pictures movie.

In the film Buddy, a laid-back chocolate and tan daxie, hops onto the kitchen counter when his humans leave the house and uses the electric stand mixer to massage his long back.

The pup, voiced by Hannibal Buress, loves the relaxing ‘spa’ treatment so much, he even rolls onto his back for a tummy rub before falling off the counter.

The scene in The Secret Life of Pets
(

Daphne, a mini black and tan dapple daxie, from California, USA, got a whisk massage herself as her owners attempted to recreate the clip.

The nine-month-old puppy sniffs at the whisk before doing a little excited spin.

Her owner then massages her back with the kitchen utensil, with Daphne rather enjoying the attention, much like her doppelganger, Buddy.

Daphne the wiener dog recreating The Secret Life of Pets
(

Viewers couldn’t get enough of the pup, with dozens of users tagging their friends and partners in the comments vowing to try it with their own sausage dogs.

Daphne isn’t the only canine film-buff entertaining the internet either. 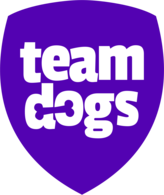 TeamDogs is a community for dog lovers who want to get the most out of their relationship with their best pal.

Make sharing the cutest photos of your dog your first job on the website and after you've done that, leave a tip to help fellow dog owners live their best lives as a proud pooch parent.

Search through hundreds of recommended walks, treats, toys and places to stay when you're on an adventure together.

From dog-friendly pubs to product reviews and the latest news, you can sniff it all out at TeamDogs.

In the clip, cheeky Dalmatian Pongo stole Roger’s hat in the park and shook it, and as he ragged it in his mouth, Daisy followed his lead and did the exact same with her toy from her living room.

She did so with such impeccable timing, it seemed as though she’d watched and copied the film many times before.

Viewers couldn’t get enough of this lovestruck pup, with one saying it was the "best thing I’ve seen today".