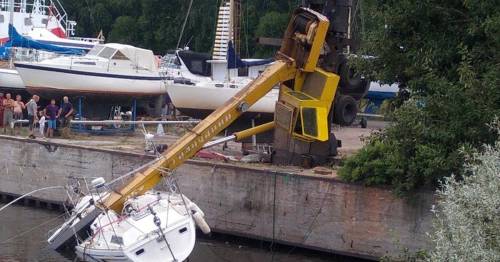 This is the moment a crane lowering a new Russian Yacht into the water toppled over and sank the boat.

The footage was taken at the Fortecia residential complex, in Kronstadt, and West of St Petersburg.

In the clip, the blue-hull is seen as the yacht is being slowly lowered into the water by a crane, and is attached with belts and chains.

At the start, the workers appear relaxed and can be seen smiling and joking.

Moments later the yacht starts to lower faster than anticipated and the base of the crane lifts into the air.

As the yellow crane comes crashing down it lands on top of the yacht. 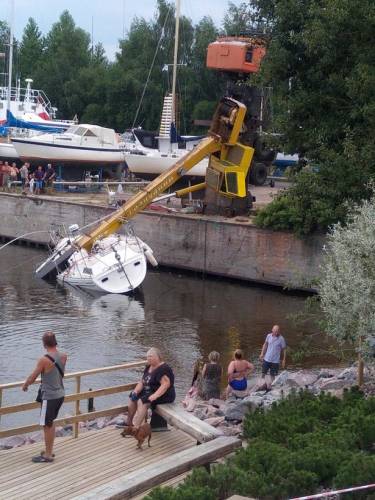 This is the aftermath of the crane being pulled down by the yacht
(Image: Newsflash)

The workers can be seen scrambling to get out of the way as the disaster begins to unfold.

The yacht ended up sinking as the footage has been widely shared online, local media reports. No injuries were reported.

It is not known who owned the yacht and how much it is worth.

Unfortunately for yacht owners, it is not the first time a blunder has been caught on camera.

Earlier this year, a family in a tiny boat went viral after squaring up to an enormous mega-yacht owned by a billionaire before frantically trying to get away. 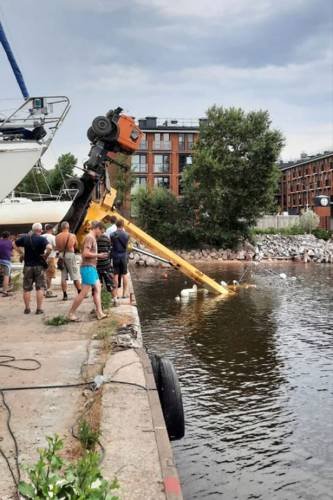 The crane collapsed over the yacht and the base was left dangling in the air
(Image: Newsflash) 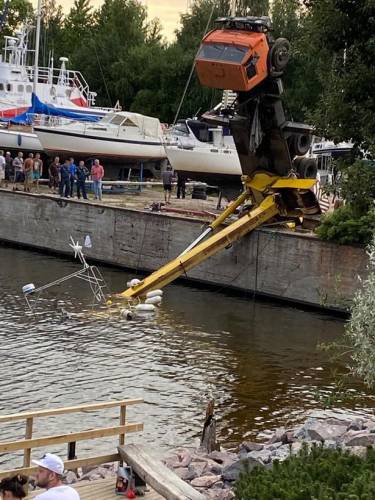 It is not known who owns the yacht but it was being lowered in the water at a residential complex to the West of St Petersburg
(Image: Newsflash)

The hilarious incident was filmed off the coast of Galicia, Spain, where Russian industrialist Andrey Melnichenko's gigantic vessel was in the water.

The enormous super-yacht is owned by the 49-year-old Russian industrialist, who Forbes says is worth an estimated £13 billion.

The huge £360million vessel, known as Sailing Yacht A, is one of the largest in the world.