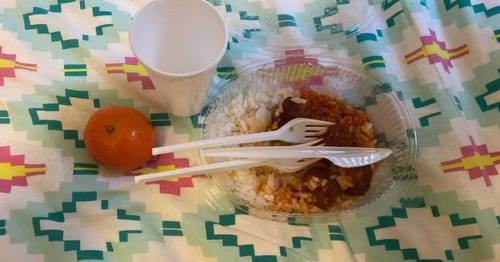 A Covid -hit cruise ship passenger claims he has been abandoned in a “horrendous” £750 Spanish quarantine hotel.

Rick Chadwick and his wife Alison were on a five-star cruise when he tested positive for Covid during his pre-flight tests, YorkshireLive reported .

Along with the 40 other Brits who caught the virus, he had to pay £75 for a "Covid-secure" taxi to their isolation accommodation.

However, Rick described the taxi as an everyday minibus and felt he’d been hugely overcharged for the journey – which only took a few minutes.

It also dropped them five hundred yards from the accommodation so they still had to walk some way in the end.

The quarantine hotel Rick Chadwick was made to stay in, in Malaga, Spain
(

Whilst Rick headed into isolation, his wife, who had not tested positive, was free to go home.

The 59-year-old now remains in the quarantine accommodation, which he says is a mess and definitely had not been cleaned.

After six nights there he was slapped with a £750 bill.

Rick, from Haworth, West Yorkshire, said the student-like accommodation and its catering was “dire” and “grim”.

He said: "The food is horrendous. It's 11am here and I've still not had anything to eat or drink for breakfast.

"I can't wait to get home. It is horrendous here. The only saving grace is the roof terrace."

He added: "The support and aftercare given to us is diabolical.

"It's a disgrace. I am lucky that I have a shower in my room as some are having to share.

"It is supposed to be a Covid centre but there are no sanitation gels."

Rick and his fellow holidaymakers were told to remain in their rooms, where food and drink would be brought to them.

He says the food is placed in a carrier bag and left hanging on the door handle, usually "stone cold".

Rick, who works as a self-employed joiner, booked the break with Marella Cruises, a British cruise line operated by TUI UK.

He described the cruise as "nice", but added: "I am annoyed with TUI.

"Once they got us off the ship they relinquished all responsibility and no one has contacted us to see how we are doing."

He claimed a fellow cruise passenger had been ringing TUI to raise the issues – only to be told to "stop ringing – it's up to the Spanish government what they do with you".

"TUI has just washed its hands of us. They are not interested," he said.

"I think they should have a representative around here to see what they (the Spanish authorities) have put us in."

Rick is hoping that the extra costs will be picked up by his insurance company and is hoping to fly back to Manchester later this week.

In the meantime, he is counting down the hours until he can return home to Yorkshire.

In a statement, TUI said: "We’re sorry that Mr Chadwick was unable to enjoy the full duration of his cruise as planned.

"We follow the correct protocols at all times and after he tested positive for Covid, he was transferred to a quarantine hotel under local guidelines in Spain.

"The safety and well-being of everyone onboard is our highest priority, and we always offer every support possible to our guests."

Previous : Canada, U.S. officials to meet in bid to resolve P.E.I. potato dispute
Next : Man’s last words before going under for a pig heart transplant shared by doctor