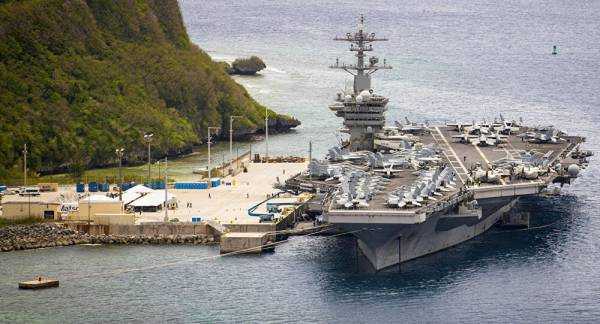 US Navy officials say a “fast cruise” simulation will demonstrate the USS Theodore Roosevelt and its crew are prepared to return to sea after spending six weeks moored at US Naval Base Guam by the service’s largest COVID-19 novel coronavirus outbreak.

Monday marked the beginning of the Navy’s final test to ensure the Roosevelt, and its recently returned crew of more than 2,900 sailors, are ready to recommence its scheduled deployment to the Indo-Pacific, according to the service’s release on the matter.

The redeployment will mark the ship’s first time back at sea since its massive COVID-19 outbreak and docking in Guam on March 27.

As of Sunday, over 2,900 sailors had been rotated onto the Roosevelt after receiving two negative COVID-19 tests and completing related quarantine and isolation requirements established by the Navy.

“Safely navigating an aircraft carrier is a complex process that involves teams of Sailors throughout the ship,” said Navigation Officer Cmdr. Christopher Brown.

“We are setting the normal underway watches and running through various navigation scenarios so that the bridge watch teams can learn how to effectively communicate with one another while still protecting themselves and each other.”

Additionally, crew members aboard the Roosevelt for the past month have been adhering to new protocols that require them to wear masks and maintain social distancing to prevent the possible spread of the contagious disease.

It remains to be seen what will ultimately happen to Capt. Brett Crozier, the former commander of the Roosevelt who was removed from command on April 2 after then-acting Navy Secretary Thomas Modly claimed he “raised alarm bells unnecessarily” in a letter that notified the service of the outbreak and requested assistance.

“It created the perception that the Navy is not on the job, the government is not on the job and it’s just not true,” Modly asserted during a news conference, just days before his own resignation over the firing.

The Roosevelt and Capt. Carlos Sardiello, its new commanding officer, are expected to return to sea and conduct carrier qualification flights for Carrier Air Wing 11 after completing the fast cruise. Additional crew members who have not yet met COVID-19-related criteria to board the ship will rejoin following the air wing integration.

Previous : Premier League plans to present Liverpool with trophy if they win title
Next : US Spending Millions on Riot Gear, Private Security in Response to Pandemic