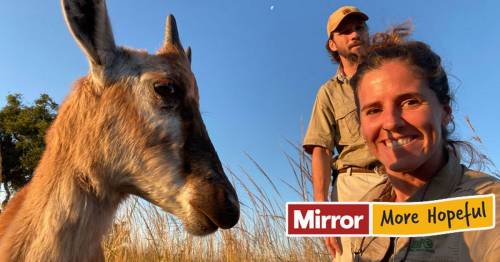 A couple who rescued a two-week-old antelope after she was orphaned and left roaming around on her own have now reunited with the animal in the wild.

Wildlife photographer Sam Turley, 29, and his wife Vera, 31, found the blesbok antelope – whom they named Meme – on her own in January 2021, when she was spotted wandering around on her own after it is believed her mother passed away.

The pair took Meme in and raised the animal themselves for seven months before releasing her back out into the wild in July 2021 – but were able to reunite with her several months later.

Sam explained: "Neither of us had ever raised a blesbok before and as you can imagine, there aren't many manuals on how to do it! It required a huge amount of patience and compassion to keep her fit and healthy but it was a really rewarding process.

"In the right areas, blesbok are a really common antelope to see and they are therefore often overlooked and under-appreciated. It was a privilege to be let into their secret world and we learnt more about blesbok than we thought was ever possible.

"She would follow my wife wherever she went and sometimes we would have a blesbok, a dog and a cat all walking together. I never thought that was even possible!"

Blesbok is a subspecies of the bontebok antelope and is found in South Africa, Eswatini, and Namibia.

And after rescuing the lonely animal, Sam and Vera found it "extremely emotional" to have to release her back out into the wild to fend for herself – even though they knew it was the right thing to do.

Vera with Meme in their garden
(

They were later reunited in the wild
(

Sam added: "It was an extremely emotional day full of mixed feelings.

"The intention throughout the whole process was always to release her back into the wild but of course, after you have such a strong bond with an animal it's really difficult to see them go.

"We had put so much time, effort and energy into raising her and to see her strolling into a herd of blesbok made it all worthwhile.

"We couldn't believe how naturally she took to her new herd, it was as if she had always been a part of it. A beautiful sight to witness."

The couple were even convinced they'd never see Meme again, until a while later when they were driving around a reserve and happened to stumble upon a herd of blesbok.

Vera called out Meme's name and the antelope responded, bounding over to the couple to say hello.

Sam said: "Blesbok all look very similar to one another which makes it very difficult to distinguish individuals. We had been driving around the reserve in the hopes of spotting her for about three hours when we tried a different approach.

"We found a herd of blesbok that we thought she would most likely be in and Vera began to call her. Meme recognised Vera's voice so we thought we may have a chance. When Vera started to talk, the blesbok raised their heads and looked over.

"Vera continued to call Meme and as all the other blesbok lost interest, one individual held her gaze. After about five minutes of calling her, Meme bolted in Vera's direction and ran straight up to her.

"I quickly grabbed my camera and luckily I managed to capture the moment as they came together. I could not believe what I was seeing and if I hadn't captured it, I don't think anyone else would have either."

Do you have a story to sell? Get in touch with us at yourmirror@trinitymirror.com .