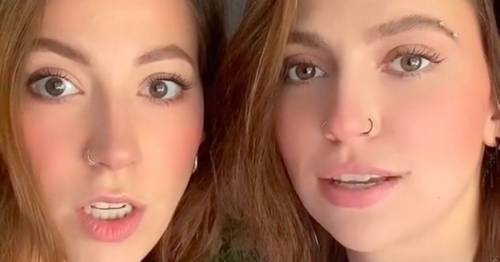 A couple who have been dating for two years are considering taking a DNA test, as they believe they might have the same dad.

Carley and Mercedes shocked their 556,000 TikTok followers when they revealed they might be related.

The loved up duo feel as if they may be half sisters, after finding out that both of their mums had sex with the same man, Daily Star reports.

In the clip which has been seen a staggering 5.6 million times, the brunette women, lip synched along to an audio that said: “Funny, yes. But not funny ‘haha’, funny weird.”

Carley and Mercedes wore similar natural makeup, and said in the viral video: “When you find out two years into dating that your mums both slept with the same guy.”

They questioned whether to take a DNA test to find out if they actually have the same dad.

They have left their 556,000 TikTok followers in shock as they revealed that they could possibly be related

Not everyone is so convinced by the couple’s wild claim about being related, with one user questioning: "I can't tell if this is real or just a TikTok joke?"
(

But, in the meantime the women have asked their fans if they should break things off if they find out that they’re related.

“If we're actually related is it wrong to stay together?” they said.

And, it seems like many people have an opinion on the matter.

One person gasped: “That could explain why you two look like sisters…”

Another user added: “No I have no idea who you guys are and I immediately thought you were sisters before reading the text.”

Whilst a third voiced: “You guys look like twins. I’m so sorry.”

Someone else noted: “Sisters by chance, lovers by choice.”

And, this person commented: “You can’t have kids together and don't have a shared childhood, in practical terms it's completely fine for you two to stay together.”

However, not everyone is so convinced by the couple’s wild claim about being related.

One user questioned: “I can't tell if this is real or just a TikTok joke?

A second said: “I feel like this is a joke but yous do for real look exactly the same.”

This person alleged: “What if they’ve been sisters the whole time and have been catfishing us into believing they’re dating.”

Previous : Will there be another heatwave in June? Bookies’ odds shorten after 32C highs
Next : Dead couple may have lay in house for a YEAR as neighbours thought they’d moved – World News